Duncanville, Texas teacher Vinita Hegwood was fired this week for sending out a racist tweet.

Hegwood wrote on Twitter on November 7 that all of the “crackers” should stop giving their opinions about the riots and Ferguson. Instead, they should just kill themsleves.

Hegwood wrote: “Who the (expletive) made you dumb duck (expletive) crackers think I give a squat (expletive) about your opinions about my opinions RE: Ferguson? Kill yourselves.” 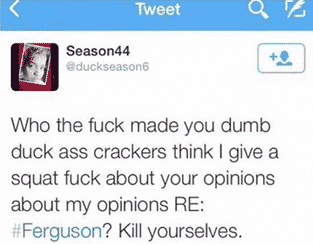 USA Today reports that Hegwood submitted her resignation less than a week after she sent the tweet. The school board rejected Hegwood’s resignation today and instead fired her.

Hegwood said in a statement: “My reaction in no way reflects the standards to which I have held myself and my students for the last 20 years of teaching … I accept full responsibility for my actions, and I regret the embarrassment that it has caused the school district.”

On Monday, the school placed Hegwood on administrative leave and today the Duncanville Independent School District Board of Trustees voted to terminate her contract.

The board writes: “Our focus at Duncanville ISD is educating our more than 13,000 students. Our 794 teachers have been and will continue to engage in the business of educating our students.”