Yesterday it was Macaulay Culkin. Today it’s Miley Cyrus. Another death hoax spread across the internet this weekend causing several Smilers to panic about their favorite singer’s well-being.

i heard a rumor this morning that miley cyrus died from overdose, i was so afraid

My life is over. Miley Cyrus died of drug overdose today.

The Miley Cyrus death hoax started circulating on Facebook earlier this week. The post claimed that there was a video of Miley shortly after she overdosed. But users who clicked the link were not directed to the Miley Cyrus death video. Instead, they were directed to a fake survey website that attempted to extract vital information like credit card numbers, bank information, and home addresses. 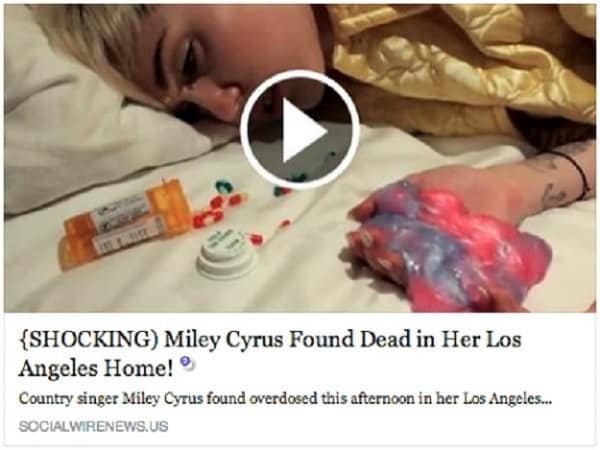 If you see something similar to the image above on Facebook, do not click it. It’s a scam. In fact, it’s the same scam that has been used on dozens of other celebrities.

The Better Business Bureau issued a warning earlier this year about “shocking videos” on Facebook. The BBB said that these videos are used as “clickbait” and often lead to malicious sites.

Here are some tips from the BBB.