The comedian, who was sitting on a horse in the photo, said that she should be able to show her nipples in a photo since it’s OK for a man to do the same. Handler also posted a photo of Vladamir Putin striking a similar pose. When Instagram removed the photo, saying that it violated its terms of service, Handler wrote:

Handler posted the photo again, this time with another message for the photo sharing service:

“If Instagram takes this down again, you’re saying Vladimir Putin has more 1st amendment rights than me. Talk to your bosses.”

Chelsea hasn’t posted the photo again but she did upload an image of Instagram’s message to her account.

Chelsea Handler isn’t the first celebrity to unofficially join the #FreeTheNipple campaign. Miley Cyrus and Scout Willis have both posted topless photos in protest against nudity laws in the United States. And I have to admit, the whole thing is a little ridiculous. I can’t post the topless photo of Chelsea Handler here because of NSFW, advertising, and internet search guidelines. But if I put a little black bar across Chelsea Handler’s breasts… Everything’s OK. 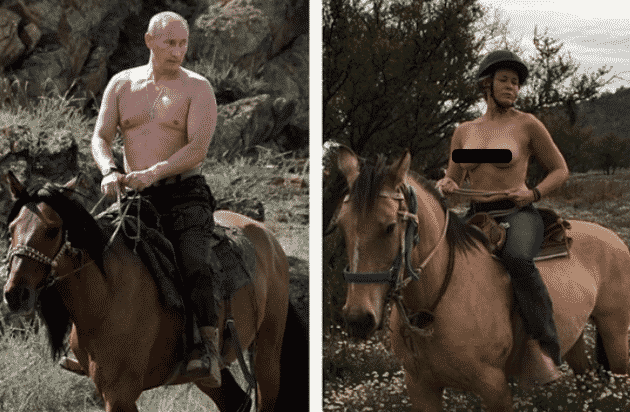 What do you think? Should women be allowed to show their bodies in the same way that men can?