Did you breathe a sigh of relief this week when you found out that the “sexy Ebola nurse” costume was really just a photoshopped Breaking Bad costume? Well, we’ve got bad news. That photo may have been fake but the sexy Ebola nurse costume is definitely real.

Here’s the photo that circulated around the internet earlier this week.

Most people on the internet were repulsed by the image. How could a company try to make this deadly disease sexy? Well, it turns out that the above photo is really just a Breaking Bad costume with a fake description next to it. Now, it’s also pretty terrible that some company tried to make Walter White into a sex object but at least it’s not a sexy Ebola nurse…

Enter BrandsOnSale.com. The website recently listed a Sexy Ebola Containment Suit for $59.99. The suit comes with an Ebola White Costume Dress (what is that?) an Ebola face shield, safety goggles, and blue latex gloves. You can also add a pair of Ebola boots for $49.99. Which means that for about $110 you can look like a totally insensitive jackass.

That’s quite the bargain. 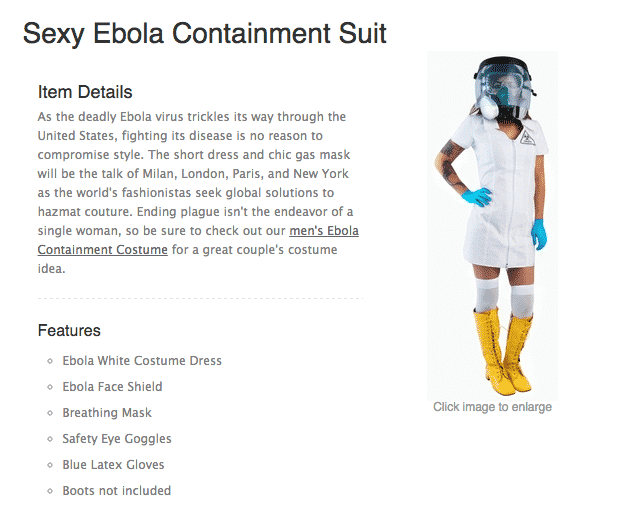 The description reads: “As the deadly Ebola virus trickles its way through the United States, fighting its disease is no reason to compromise style. The short dress and chic gas mask will be the talk of Milan, London, Paris, and New York as the world’s fashionistas seek global solutions to hazmat couture.”