A man at Dallas International Airport was tackled by a group of passengers today after he started screaming homophobic slurs. One of those hero passengers may or may not have been Paul Rudd.

A video was posted to YouTube today showing a man trying to pick a fight with another passenger. The man takes off his jacket, taunts the passenger, then kicks the man while yelling “f*cking queer.”

That’s when the other passengers swoop in. The violent homophobe is tackled to the ground by a group of passengers and one of the men appears to be actor Paul Rudd.

You can see Rudd, or a man who looks a lot like the actor, lurking in the background in a brown suit. When the violence starts, Rudd rushes in like a superhero. 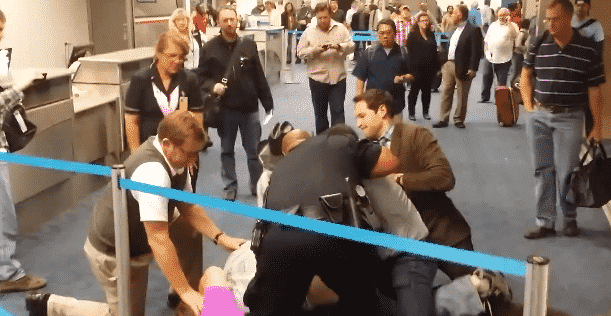 Check out the video below.

The guy in the video certainly looks like Rudd and at least one Twitter user reported seeing the actor at the Dallas airport.

Is this or is this not Paul Rudd helping take down the gay-bashing dude at DFW Airport? #RuddTruther #PaulRudd pic.twitter.com/uE5UAzrGzg

So is it him? Did Paul Rudd tackle that violent homophobe at the Dallas Airport? If it was him, Paul Rudd is awesome. If it wasn’t, that guy that looks like Paul Rudd is equally awesome.