Man Tells Cops He ‘Needs New Mugshot’ On Facebook, Gets...

Well, he got what he wanted. Shortly after taunting the Christchurch Police Force on Facebook, Samuel Evan Lake got the new mugshot he was hoping for.

The Christchuch Police Force in New Zealand frequently uses Facebook to post messages about people who are wanted for arrest. Last week, they posted Lake’s photo and asked the community if anyone had any information about his whereabouts.

Well, Lake saw the message and decided to taunt the police.

Lake wrote: “I need to get a new mugshot.”

The police replied: “Come see us and will arrange at no cost.”

Which forced Lake to add: “If only they were as good at finding me as they were with comebacks.” 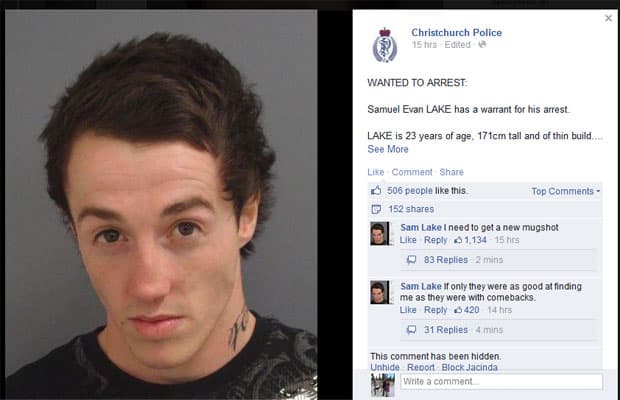 The post quickly gathered thousands of likes on Facebook and soon the Christchurch community was on the case. A few days later, Lake was apprehended.

The police department updated their Facebook page last night to tell everyone that they had caught Samuel Evan Lake.

A message on the FB page reads:” Thanks to everyone for their help locating Mr LAKE in Wellington tonight!”

Unfortunately, the police department has not issued a new mugshot for Lake…  So maybe he didn’t get exactly what he asked for.