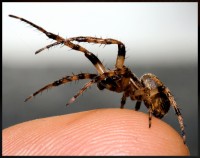 Well, here’s the creepiest thing you’ll read all day. Australian Dylan Thomas found a tropical spider burrowed UNDER his skin after returning from a trip to Bali.

Thomas said that he noticed a strange mark on his stomach while vacationing on the Indonesian island. The mark started to grow, literally crawling across his body, as the spider explored the area underneath Thomas’ skin.

Thomas went to the hospital in Bali and was told that he was probably bitten by an insect. The doctors gave him some medicine and sent him on his way. Well, that didn’t exactly solve the problem.

Over the next three days the strange mark continued to grow. He eventually returned to the hospital where a dermatology specialist discovered a spider living under his skin.

Thomas wrote on Facebook: “Well after running tests and putting things inside my stomach they finally found out it was a tropical spider that’s been living inside of me for the last 3 days, managed to get it out luckily.”

Dylan Thomas’ story started in a local Australian newspaper but has now spread all over the internet. Of course, there are some who question the veracity behind Thomas’ claim.

Snopes.com writes: “Thomas’ claims were widely reported but no recorded cases of a spider burrowing into live human tissue have ever been confirmed. Urban legends of spiders living under human skin or laying eggs have circulated for more than a century, but no evidence has emerged to indicate it is likely or possible for a spider to live under human skin … It is also worth pointing out that not only has a spider never been known to harm a human in the manner described, it also likely could not live for three days inside a scar and would probably suffocate in short order.”

Do you think this is a true story?