Donald Trump may be the most envied (or most delusional) man on the planet but he does have a soft spot for his fans. So when a Twitter follower asked him to retweet a photo of his parents, the Donald happily obliged.

But here’s the thing. The photo was actual of serial killing couple Fred and Rosemary West.

Gawker reports that Phil Bradbury, who goes by the name Feckhead on Twitter, proposed the request to The Donald, writing: “My parents who passed away always said you were big inspiration. Can you pls RT for their memory?” 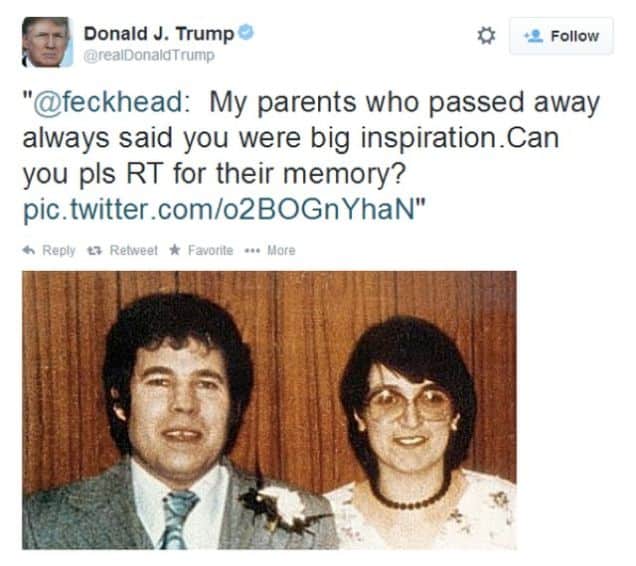 Some jerk fraudulently tweeted that his parents said I was a big inspiration to them + pls RT—out of kindness I retweeted. Maybe I’ll sue.

I thought I was being nice to somebody re their parents. I guess this teaches you not to be nice or trusting. Sad!

Way to go, Feckhead. Now Donald Trump isn’t going to be so nice to everyone…

Just in case you were wondering, Fred and Rosemary West raped, tortured, and killed at least 11 young girls starting in the 1970s. They were caught in the early 90s. Fred committed suicide before going to trial while Rose was sentenced to life in prison.