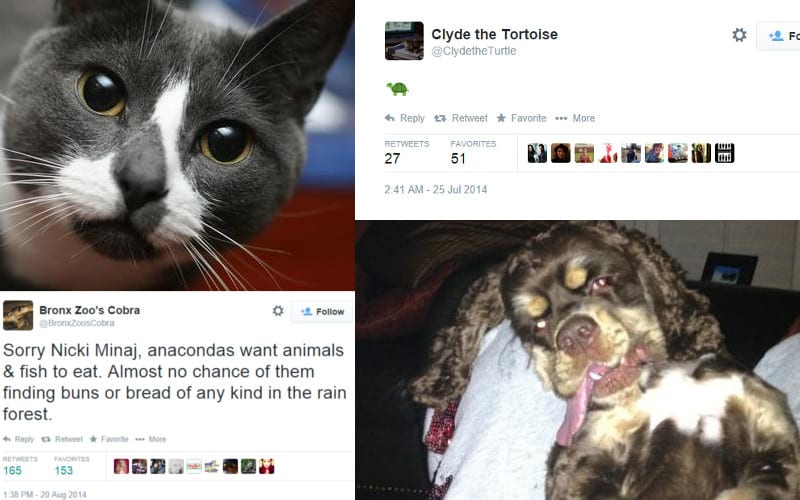 We’ve all watched nature documentaries and observed traits and actions that let us know just how close to animals we humans really are. But could animals even prove to one-up humans at the own game of civilization? Movies like Planet of the Apes have allowed us to sneak a peek at what our world would look like under animal rule — but what about the realm of social media? Here are ten of the animals who tweet, and are leading the charge to reclaim Twitter for their own furry kind.

A raw, understated look at the day to day life of a common squirrel that has captured the imagination of its near 100,000 Twitter followers. If you’ve ever wanted to know what it’s really like to be a squirrel in this day and age, this is a must-follow.

Sadly inactive in recent years, the short but sweet Twitter career of Cecil Burke proved the dog to be well ahead of his time. The ‘rough day’ depicted in the above tweet marked the end of Burke’s Twitter presence, but fans will remember it for years to come.

Sorry Nicki Minaj, anacondas want animals & fish to eat. Almost no chance of them finding buns or bread of any kind in the rain forest.

This hugely popular reptile has two favorite topics on Twitter; his escape from the zoo and eating other animals. He’s a distinct voice, even amongst the world of animals in social media, and he’s got a lot to say.

Do you think Starbucks could make a Pumpkin Squirrel Latte? Asking for a friend.

An often outspoken and regularly mischievous dog, who rarely has anything other than criticism for ‘ignorant bipeds’ — that’s us humans. Heart of gold, though.

Yes I need to be in the bathroom any time you're in there. Non-negotiable. Oh and I weigh 11.6 lbs now. #gingershadow pic.twitter.com/ctLrEKSTwW

Not even a year old, this charming cat already has more than a thousand followers on Twitter. Regular photos of every stage of the now rather enormous meow-er’s development have no doubt kept many of his fans entranced.

A woolly CD just came through the post. I think it's Ewe2

This one does exactly as it says on the tin; it’s a horse, and a weird one at that. Imagine absurdist comedy coming straight from the horse’s mouth, and you’ll get some picture of proceedings.

The stream of consciousness tweeting style that this cat possesses will surely be studied as poetry in years to come. A great writer and a true feline visionary —followed by more than a million and you can surely understand why.

I believe I know what the trees and leaves and sticks and flowers do when I am not looking, but I would like to actually see. I am a bear.

Meditative musings from a true Ursa Major. It’s a rare thing that a Twitter account can be relaxing, but it’s certainly true of this bear.

I love watching my sheep with their lambs….memories of spring 2014 pic.twitter.com/ZCzKtnV2nH

There’s not a doubt in my mind that this is the best animal on Twitter. A real working cat based out in Ireland, the Cat Shepherd’s blog is also a great way of keeping up with his exploits.

Do you have another personal favorite animal on Twitter? Let us know about them in the comments section below.