Before Tom Brady was an NFL quarterback, he was just another kid looking for a job. The New England Patriots QB recently found his old resume and decided to share it with his fans on Facebook.

Back in 2000, Tom Brady was just another NFL hopeful. And when the draft went into the sixth round, when 198 players had already been chosen, Brady must have been a little worried about the strength of his resume.

Which begs the question: Would you have hired Tom Brady if he didn’t get drafted?

Here’s a better look at his resume. 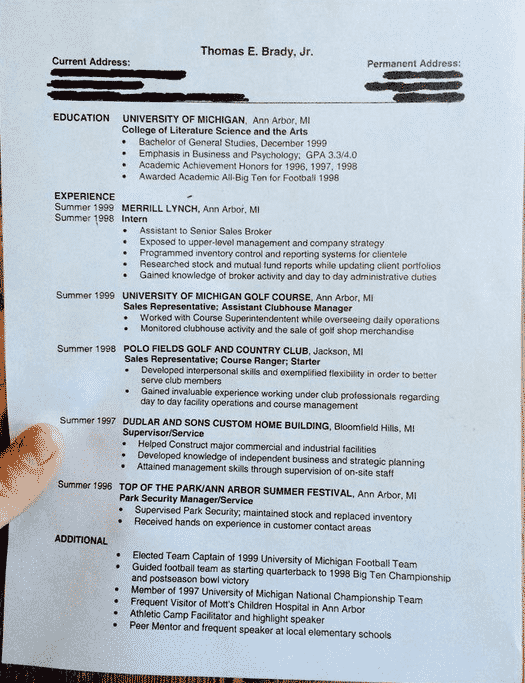 OK, so he gets some points for graduating from the University of Michigan but he loses points for his “general studies” degree. Also, where’s his overall GPA? Brady gives his GPA for business and psychology but leaves off his overall grade point average. He does make up for that, however, by mentioning he was awarded Academic All-Big Ten for Football.

His work experience is also pretty impressive but some of the skills seem a little exaggerated. Did he really “develop interpersonal skills and exemplify flexibility” at the country club?

What do you think of Tom Brady’s resume? Would you have given him a job?