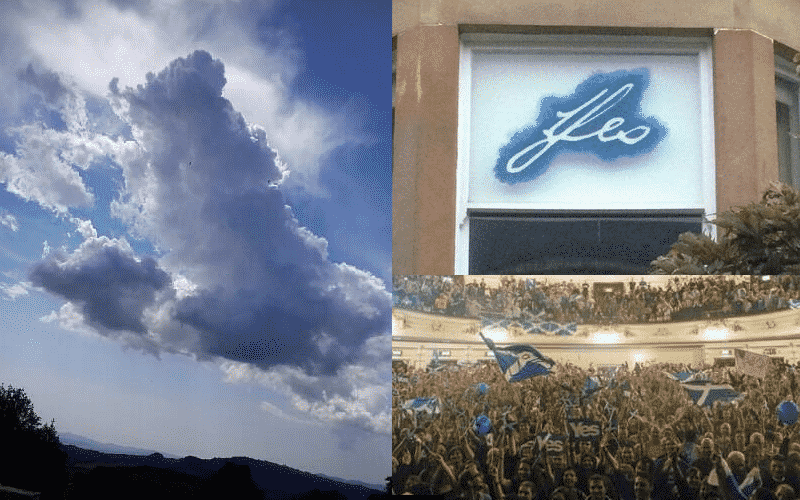 With only hours ago until the polls open for Scotland’s historic referendum on whether or not to remain a part of the United Kingdom, debate continues on social media as to whether or not Scotland will end the week as an independent nation. With early projections still too close to call either way, Twitter discussion of the vote has been both a unique insight into general opinion and a broadly utilized soapbox for both sides.

As you might imagine, Scotland’s rich comedic heritage has been out in full force on Twitter, offering both humorous asides on the subject and more serious discussion of the monumental decision that the country faces. The hugely popular Limmy, firmly situated on the ‘Yes’ side of things, has had a lot to say on the matter.

What an exciting, exhilarating Friday it'll be if it's a Yes. The opportunity, the hope, the new possibilities. Running the place ourselves.

He’s far from the only Scottish personality letting his thoughts be known, with many familiar faces having added their voice to the discussion, one way or another.

Interesting cloud. Anyone know what it means? pic.twitter.com/PA5WBh134c

Sounds a bit silly and weird, doesn't it? #YES it does.

As you might imagine, some of the loudest voices from Scotland are proudly waving their banner for the Yes campaign. However, there’s certainly plenty outside of the country looking to convince Scots that the United Kingdom is Better Together. A large scale rally in London’s Trafalgar Square earlier this week certainly split Scottish opinion as to whether it was a sincere attempt at maintaining the Union for the better of all involved, or a patronizing last-ditch attempt at maintaining the status quo, but involvement rather than apathy is certainly a sure-fire way of eliciting some sort of response.

Please show we care about Scotland & would like to ask them to stay with us. Join me in Traf Sq. Mon 6pm #letsstaytogether @wakeuptobreakup

However many will write off most of the input from celebrities as a rather superficial way of interjecting themselves in a debate. Perhaps more interesting is the ground level view of the vote that we get via Twitter — personal tweets like these will probably hold far more influence over prospective voters than the opinions of Eastenders hardman Ross Kemp, after all.

My sister's flat with my mum's handwriting. Mum died in 2001…my dad found the "Yes" in an old letter. pic.twitter.com/pITj63IBkr

The three pictures above, all from very different sources, are just a slice of the broad support that the Yes campaign has received on Twitter and other social media networks. Seemingly organically, we’ve seen grassroots support for Scottish Independence flourish online, with a broad range of sources doing their utmost to spread the word and reinforce the campaign from the bottom up.

Scotland stands on the precipice of a new era for the country, but it’s still not clear which way things will go on Thursday. What does seem obvious is that the referendum has ignited a surge of political interest throughout the country; an enormous turnout is expected for the vote tomorrow, and televised debates over the last few weeks have fostered a broad engagement with the referendum from voters of all ages and backgrounds. We’ll have to wait until to see what the future holds for Scotland, but it seems that a widespread participation in politics from a large swathe of the Scottish population will be a result of the referendum either way.