CoverGirl is a proud sponsor of the NFL. Well, proud might not be the right word. The company responded to a photoshopped NFL ad today saying that the company believes that “domestic violence is completely unacceptable.”

The internet’s response: “Talk is cheap.”

The image above was created in the wake of several domestic abuse scandals currently plaguing the NFL. Some people are calling for Roger Goodell to step down as commissioner, while others are calling for companies like CoverGirl to stop sponsoring the NFL.

CoverGirl responded to the image today saying that it in no way condones domestic violence. But don’t expect CoverGirl to stop sponsoring the NFL anytime soon.

CoverGirl writes on its Facebook page: As a brand that has always supported women and stood for female empowerment, COVERGIRL believes domestic violence is completely unacceptable. We developed our NFL program to celebrate the more than 80 million female football fans. In light of recent events, we have encouraged the NFL to take swift action on their path forward to address the issue of domestic violence.

That didn’t soothe over any anger with fans. The CoverGirl Facebook page quickly lit up with comments about how the company wasn’t doing enough. 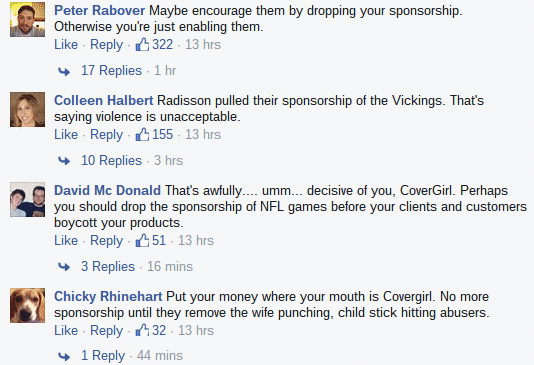 Do you think CoverGirl will stop sponsoring the NFL? The Raddison recently announced that it would no longer sponsor Minessota Vikings games in light of Adrian Peterson’s recent indictment. Do you think other companies will follow suit?