With the Apple explosion from Apple Live last week, introducing the Apple Watch, iPhone 6, and Scarf Guy, some of the excitement continued on for the free U2 album that was offered. For everyone else who doesn’t like U2, Bono especially, or when you did not give consent to whether or not you want an entire U2 album in your iTunes.. they were very unhappy with the surprise in their account.

FUCK YOU BONO YOU OLD FUCK I DONT WANT YOU ON MY PHONE NIGGA BITCH STUPID GLASSES FUCK BONO http://t.co/ZR1UEzh1dS

GET OFF MY FUCKING PHONE. YOU COULDNT COME UP WITH AN ACTUAL MARKETING IDEA? FUCK @U2 I DONT WANT YOU. FUCK BONO. I DIDNT ASK FOR YOU IM MAD

Because of this inevitable hate, Apple set up an official page to delete the free U2 album, Songs of Innocence, from your iTunes permanently. “Once the album has been removed from your account, it will no longer be available for you to redownload as a previous purchase.”

Bono could care less and anticipated the backlash, “For the people out there who have no interest in checking us out, look at it this way… the blood, sweat, and tears of some Irish guys are in your junk mail.” U2’s manager had his own words, “It’s a gift from Apple. If someone doesn’t like the gift, they should delete it. If you don’t want it and you don’t need it, delete it.”

Rawr, someone is angry. Either way, now you can feel like you have a say in what songs are in your iTunes library.

For no reason at all… here is that awkward moment when Tim Cook and Bono touched fingers.. 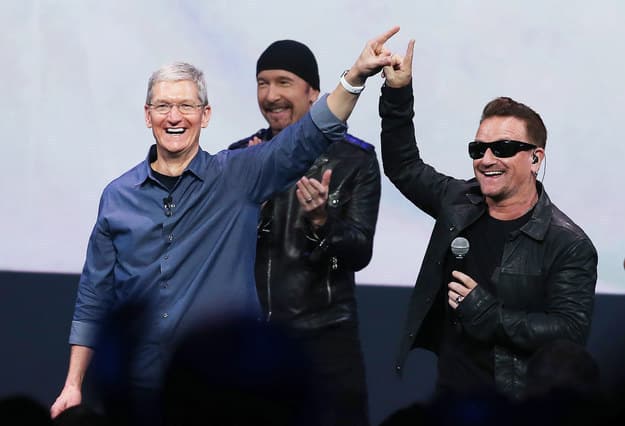