A Pizza Hut In Australia Promised Free Animal With Purchase...

“I’ll have ten large pizzas, all sausage, and one hamster. kthnxbai.”

A Pizza Hut in Melbourne, Australia decided this promotion would be a good idea and no one would get upset. The sign below reads, “Buy any 10 large pizzas and get one free small animal from Pets Story.” 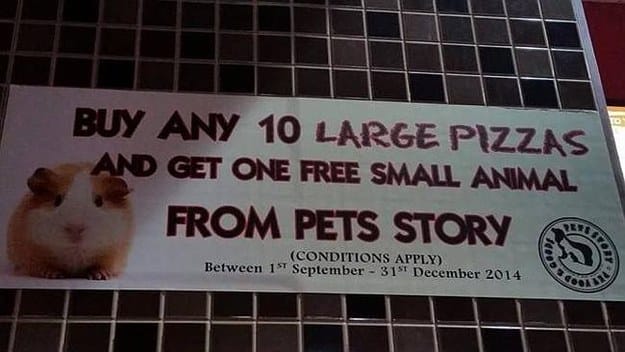 Once people started to freak out on social media, an Australian animal rights group, Oscar’s Law, posted it to their Facebook page after getting a call from a supporter over the weekend. This group is against the sale of animals in pet stores.

A spokesperson for Pets Story in Mount Waverly, Victoria, told sources it was an incorrect signange and should have never been posted. A senior employee at the store said Pets Story was never planning to give away free animals and the sign was supposed to say, ‘free animal kit.’ Apparently, it is really significant if the printer takes out a word.

“There is no hope in hell we would give away small animals, we don’t sell dogs or cats and we actually support Oscar’s Law and work with adoption groups in our store.”

Within hours, Pizza Hut responded to the social media anger: 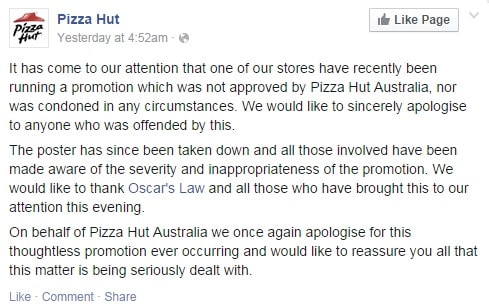 Yikes. Not a good day for Pizza Hut. But damn that stuffed crust pizza.