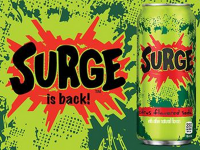 Wait, what?! Coca-Cola is bringing Surge back.

The company is bringing its Mountain Dew challenger back to store shelves later this year. Well, not store shelves. Surge will be available exclusively from Amazon.

If you’ve never had Surge, it’s basically Coca-Cola’s brand of Mountain Dew. The company introduced the drink in 1996 to challenge Pepsi’s “extreme” product. According to Amazon, Surge is the “bolder citrus soda.”

I stopped drinking pop almost 10 years ago. But when Surge comes back, there’s a slight chance I might relapse. — Kevin Double You (@kevinw502) September 15, 2014

Coca cola is bringing surge back! It sold out on amazon already so they better send it to the store

As someone who has given up 99% of my typical soda intake, this #Surge announcement is like showing a reformed alcoholic a pool of Whiskey. — Aaron J. Amendola (@ImAaronJ) September 15, 2014

Coca-Cola sold Surge until 2001. Since then, Surge fanatics have been begging the company to bring back the popular soda. Twitter campaigns, Facebook pages, and searches on Amazon eventually convinced the company to give Surge another shot.

Put on some Wallflowers and fire up the N64…Coke is bringing back Surge.

Circa ’96: Poor camp counselors at my church camp had to ban #Surge due to excessively hyper children. Can’t wait to relive the glory days.

I’m all for Amazon using drones if it means bringing a Surge to my front door.

Are you excited for the return of Surge?