Mark your calendars, all you Guardians of the Galaxy fans. Chris Pratt is set for hosting the Saturday Night Live season 40 premiere on September 27. Pratt continues his world take over, staying strong with his Parks and Recreation platform, continuing social media fame (did you see him rapping Eminem?), and will be joined by Ariana Grande for the musical guest.

This will be Pratt and Grande’s first time on SNL, so it should be good (or terrible but I guess we will have to wait and see).

If that isn’t enough to get you excited for Season 40, Sarah Silverman will be hosting on October 4 with Maroon 5. That will be the firth time Maroon 5 has been a musical guest on the show. Silverman was a cast member from ’93-’94 and will host for the first time.

NBC’s Saturday Night Live’s tumblr page was getting all sorts of attention with this post titled, “We’re going to leave this riiiiight here.” 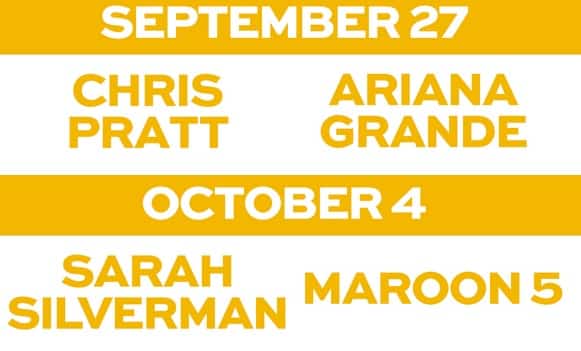