Today is not a national holiday (yet) but it is Beyonce’s birthday. The singer turns 33 today and to celebrate, well, she’s basically taken over Twitter.

Three of the top ten trending terms in the United States are about Beyonce’s Birthday. Fans of the singer are using #BeyDay, #HappyBirthdayBeyonce and Queen Bey to send the singer love on her birthday. 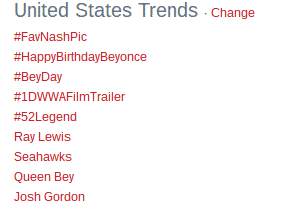 32 was a pretty big year for Beyonce. She released a surprise album, had a massively successful tour, (The Mrs. Carter Show earned close to $220 million) and joined her husband Jay-Z for a string of concerts this summer.

Of course, it wasn’t all smooth sailing. There was that little elevator incident and rumors that her marriage with Jay-Z is coming to a close. But Beyonce has managed to shake off the haters and it appears like the rumors were just rumors.

Beyonce fans are nearly as fanatical as the hordes of One Direction / Justin Bieber fans. They call Beyonce “queen” and they treat her as such.

One student reportedly even tried to use Beyonce’s birthday as an excuse to miss class.

HA! Student told professor she won’t be in class due to Beyoncé’s birthday. #HappyBirthdayBeyonce pic.twitter.com/9LdJZIygrx

We don’t know how Beyonce is spending her birthday (we’re guessing sailing on a yacht to a private island that only filthy rich people know about) but hopefully she checks twitter sometime today. Her fans are going nuts.

Why isn’t Beyoncé’s birthday recognised as a national holiday yet? #BeyDay #HappyBirthdayBeyonce