The Fappening By The Numbers: Nude Photos Spur Charity Donations,...

If you’ve been on the internet this week you’ve probably heard about a little thing called “The Fappening.” In case you haven’t, here’s what happened: Someone stole hundreds of nude photos from celebrities like Jennifer Lawrence and Kate Upton and posted them to online.

It caused a massive internet freak out. First, perverts around the world rejoiced because they could see celebrities boobies. Then the female victims spoke out about how their privacy had been invaded. Then reporters from around the internet gave their take on The Fappening. Then the FBI opened an investigation to find the person responsible for stealing and leaking the photos.

The news cycle has been completely consumed by “The Fappening” and there are some really interesting debates going on at the moment. Like, should the person responsible for the leak be charged with child pornography since McKayla Maroney was underage at the time. Should people be more careful about where they store their photos or is that just victim blaming? Should Apple be held responsible for the leak?

Those are all interesting questions and they’ll get answered someday. But for now, let’s just take a look at how big “The Fappening” really was on the internet.

One of the easiest measurements comes from Reddit. Shortly after the leak a subreddit called The Fappening was started.

The subreddit description reads: “The Fappening” refers to a series of nude photographs featuring various high profile celebrities leaked on 4chan in late August of 2014. This subreddit is for those leaked photographs, as well anything related to the leak.” 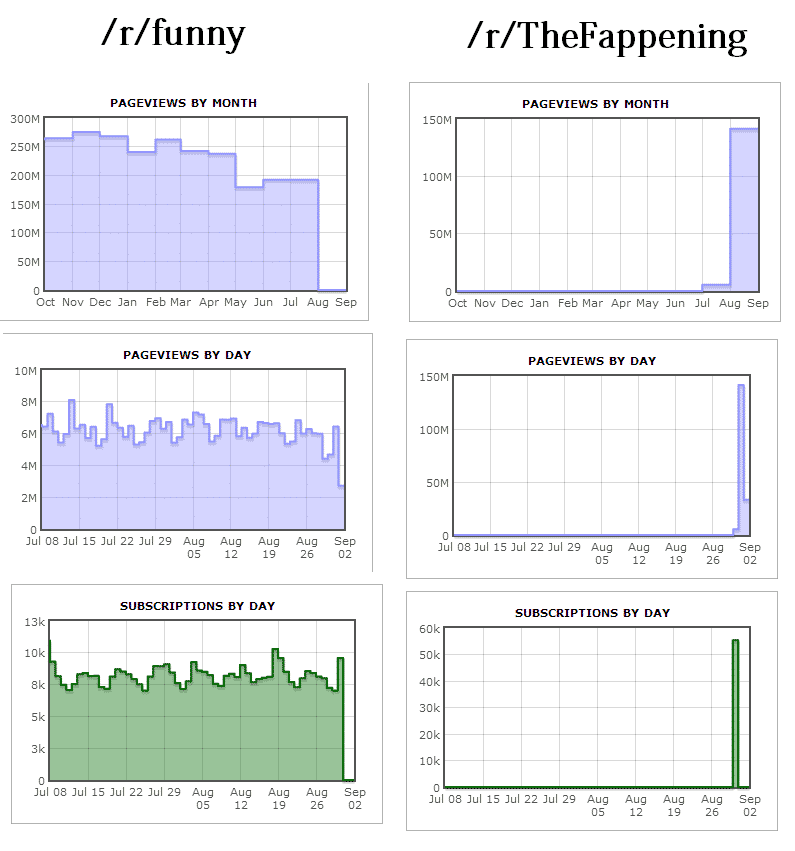 On Monday, four of the five top terms on Google were all related to the fappening. More than 5 million searches were made in an attempt to find nude photos of Jennifer Lawrence, McKayla Maroney, Kate Upton and Mary Winstead.

Of course, traffic isn’t our only concern.

Surprisingly, the fappening actually inspired some charitable givings. A lot of people were torn when they saw nude photos of Jennifer Lawrence and Kate Upton had leaked onto the internet. They wanted to look at them, but at the same time they felt guilty. In order to make themselves better for looking at the photos, they donated to charity.

Internet fappers decided to donate to prostate cancer “in JLaw’s honor.” They raised more than $5000 within hours and quickly became the charity’s top donor. Unfortunately, the Prostate Cancer Charity announced today that it would not be accepting donations from the reddit community.

A message on the website reads: “On Monday, a Reddit user directed other Reddit users to make a donation to the Prostate Cancer Foundation without the Foundation’s knowledge. We would never condone raising funds for cancer research in this manner. Out of respect for everyone involved and in keeping with our own standards, we are returning all donations that resulted from this post.” 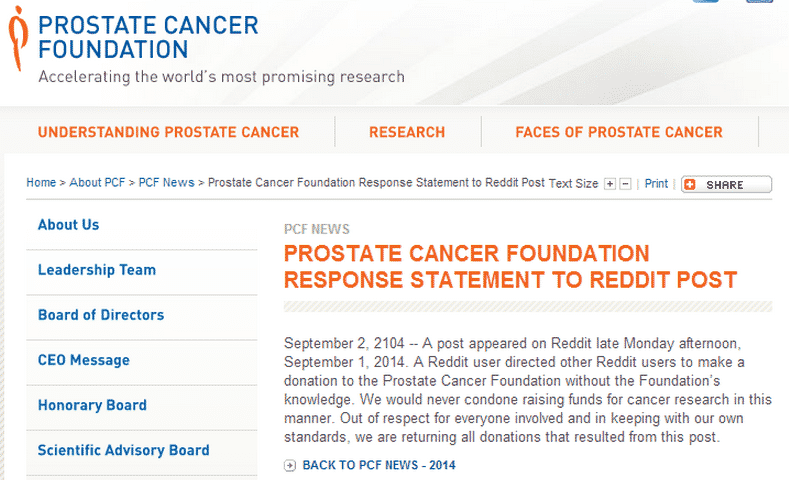 After being turned down by the PCF, Reddit turned it’s attention to Water.org.

If the FBI does catch the person / people responsible for the leak it’s likely that they will be spending several years in prison.

Several of the victims have expressed their desire to press charges against the person responsible for the leak and the FBI is definitely taking the case seriously. In 2012, they caught and convicted a Christopher Chaney after he leaked photos of Scarlett Johannson and Mila Kunis. Chaney was indicted on nine counts of computer hacking, nine counts of illegal wiretapping, and eight counts of identity theft. He was sentenced to 10 years in prison.

The person responsible for the fappening could face an even stiffer crime. This week’s leak featured hundreds of photos from dozens of celebrities. The hacker may also be charged with child pornography charges if the McKayla Maroney photos were truly taken when she was underage.