by Amanda Peterlin 8 years ago9 months ago

The world turned differently at last year’s MTV VMAs after Miley Cyrus and Robin Thicke did… whatever they did on stage. From that moment, a windstorm of backlash hit Cyrus and she hasn’t been able to recover since. That recovery is good and bad in different aspects of her career.

At the 2014 MTV VMAs, instead of performing like Beyonce, the twerkin’ and tongue combo singer stayed off the stage, even when it came time to accept her award for Wrecking Ball for Video of the Year. When Cyrus’ name was called by Jimmy Fallon, both Miley and an unknown gentleman started walked towards the stage. Miley stayed behind and the world was introduced to Jesse Helt.

Fallon held onto the Moonman trophy and Jesse used this moment to speak about the youth homelessness problem in the United States:

“My name is Jesse and I am accepting this award on behalf of the 1.6 million runaways and homeless youth in the United States who are starving, lost and scared for their lives right now. I know this because I am one of these people. I survived in shelters all over the city. I’ve cleaned your hotel rooms, I’ve been an extra in your movies, I’ve been an extra in your life. Though I may have been invisible to you on the streets, I have a lot of the same dreams that brought many of you here tonight.”

Everyone except Jesse and Miley were very confused. Example: Sam Smith and Katy Perry’s faces. 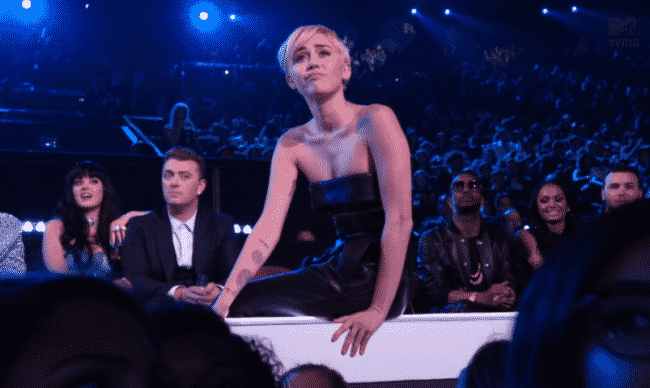 Jesse told viewers to go to Miley’s Facebook page to learn more on how to help. Miley had this video below explaining more of “My Friend’s Place” campaign. Obviously this speech was to do a complete 180 from her take on the VMAs last year.