With under 24 hours of being on the internet, Taylor Swift’s single off her upcoming album, 1989, and the accompanying music video for “Shake It Off” have been getting the most ridiculous mixed reactions.

First off, whatever you think about the song and the video, the public should get used to it because this song will take over the world. Her video has gotten over 5 million views overnight. OVERNIGHT. The 24-year-old’s last album, Red, was a mixture of many sounds. Swift tried different styles and said 1989 will be a strictly pop record, like the songs “22” and “I Knew You Were Trouble” got the world ready for.

Critics in the past complained about Taylor being a brokenhearted country singer who needs to grow up. “Shake It Off” is exactly that. Instead of singing about the approval of her “flaws” she threw a big middle finger to those critics and decided to make fun of herself. That is the key idea here. She is making fun of herself. So why in the world are people freaking out that this blonde-haired pop princess and saying she is perpetuating black stereotypes? Swift wants to remind the other ladies in the pop category that she isn’t going down without a fight and can handle multiple genres.

Taylor Swift is twerking while Ferguson is burning. That's pretty much America in 140 characters or less.

Yes, she incorporates a lot of dancing in this video: twerking, shaking her booty, and imitating ‘boom box holding’ break dancers. Where are the comments about ballet, interpretive dance, cheerleading, and moves like you were at a sleepover? Plus, she’s throwing around that ribbon like she’s trying to revive it. If someone actually thinks Taylor watched the move below in playback where she is twerking in tiny jeans, no booty, and pointing in the direction of her awkward thrusting and went “oh yeah, nailed it!” you must be crazy. Could the video have been constructed differently to address these concerns before uploading it? Sure, but it’s not our video. It’s hers. 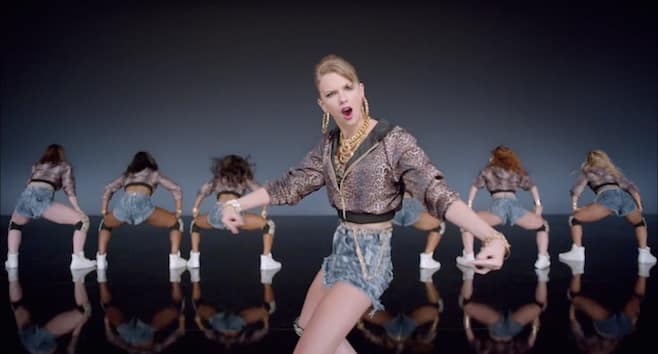 Simply put, this entire music video is the opportunity for Swift to make fun of herself before you have the chance to. Kind of like Eminem in the final rap battle scene in 8 Mile, “tell these people something they don’t know about me.” Is it just me or did Taylor become WAY more attractive with her new haircut, attitude, and happy carefree spirit? This is a Taylor Swift transformation.

She is definitely receiving more positive reactions that negative, which is genuinely deserved:

Not really a Taylor Swift fan, but her new song is kind of awesome.

New Taylor Swift song is great. GIVE IT A CHANCE YA GUYS

…I actually like @taylorswift13’s new video. I like how she’s not taking herself seriously while everyone else is. #thereisaidit