American Apparel sent out emails on Monday offering 20% off to customers for the next 36 hours “in case you’re bored during the storm.” The email includes a map of the United States, with the states affected by Hurricane Sandy highlighted in red. The sale is only available in Connecticut, Delaware, Massachusetts, North Carolina, New Jersey, New York, Pennsylvania, Virginia and Maryland, according to the email. 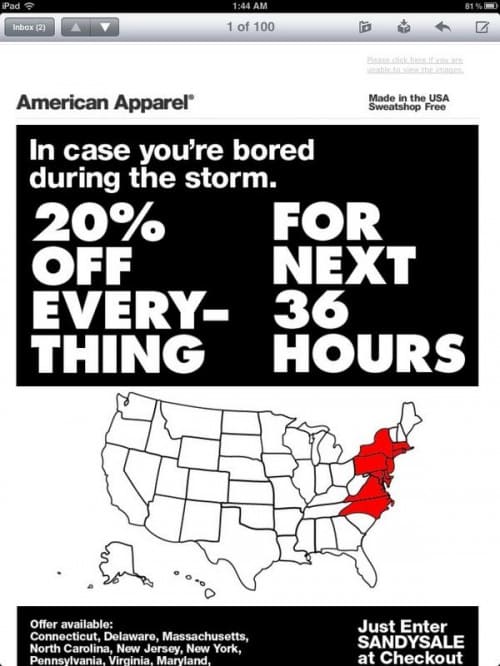 As if sexualized ads and harassment lawsuits weren’t enough for a boycott, @americanapparel sent out a “hurricane Sandy sale” mail. Ugh.

Hey @americanapparel people have died and others are in need. Shut up about your #Sandy sale. twitter.com/whitneyhess/st… (via @whitneyhess) — Christine Lu (@christinelu) October 30, 2012

GAP’s offensive tweet was removed, but here’s a screencap via Mashable: 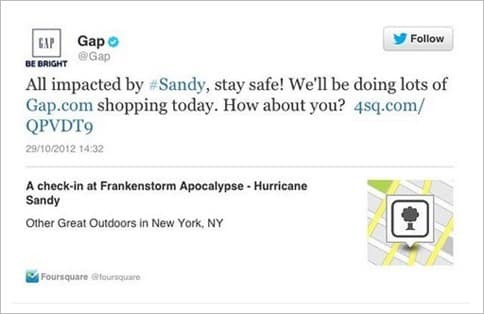 To all impacted by #Sandy, stay safe. Our check-in and tweet earlier were only meant to remind all to keep safe and indoors. — Gap (@Gap) October 29, 2012

@gap Try taking a break from being a shill for a couple of days instead of trying to tie in a life-threatening storm warning to your ads? — jontando (@jontando) October 30, 2012

@gap …then say that then. Don’t try to be clever

Looks like there might be a social media marketing manager opening or two at American Apparel and GAP. What do you think of these retailers and their reaction to Hurricane Sandy? An ill-fated attempt to make light of the storm, or completely, unabashedly insensitive?