Mack alleges that her boyfriend War Machine, a.k.a. Jon Koppenhaver, severely beat her in Las Vegas earlier this week. Mack posted a photo of her injuries on Twitter (graphic photo below) as well as her account of the incident.

Added below are the graphic photos and story about what happened pic.twitter.com/U1T1X2OP4d

Koppenhaver is currently wanted by police. There is a $10,000 reward for his capture.

Mack alleges that Koppenhaver entered her home in Las Vegas and forced an unidentified guest to leave the premises. When the guest was gone, Warhammer forced Mack to undress and shower in front of him. Then he allegedly dragged her out of the shower and started to beat her.

Christy Mack broke 18 bones in her face, lost a few teeth, and ruptured her liver in the attack. 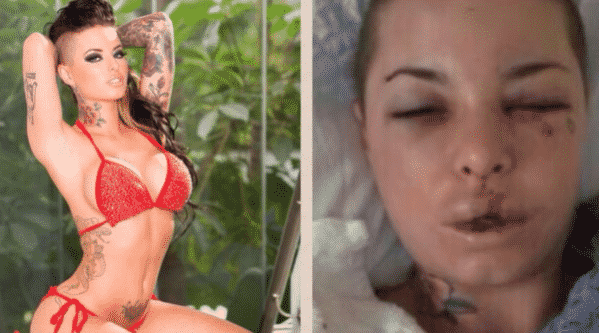 I would also like to thank @DrToscanoDDS for offering his services in fixing my teeth. I appreciate your support for all victims of abuse.

The fundraising page, which has already raised close to $40,000, reads: (Christy Mack) is currently being hospitalized for 18 broken bones around her eyes, a broken nose in 2 places, several missing and broken teeth, a fractured rib, a ruptured liver, injured leg and swelling. She is currently unable to walk on her own or chew due to the injuries … There is NEVER any situation or excuse that justifies violence against a woman!”

I would like to thank everyone for the support and kind thoughts over the past few days. I will never be able to express my gratitude.