Y’all Will Never Catch Me: Man Taunts Police On Facebook,...

If you’re trying to avoid being caught be the police you should, you know, avoid the police. Roger Ray Ireland was arrested this week after he taunted the Anne Arundel County Police Department on Facebook writing: “Y’all will never catch me.”

The Arundel County Police Department posted about Ireland last Wednesday on Faccebook. They put up his picture and asked #SocialMediaSlueths to help find him on #WantedWednesday. Ireland’s friends and family started tagging him on the post and eventually the wanted man showed up on Facebook to taunt the police.

Ireland told all of the Facebook users posting about his arrest warrant to mind their own business. He told the police that they would never catch him. 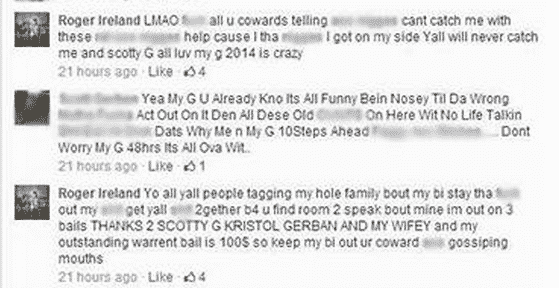 Well, Ireland’s bold prediction didn’t exactly come true. He was caught the next day in South Baltimore and arrested for violating his probation.

Police Chief Kevin Davis said: “Social Media is a great tool for law enforcement and we appreciate our Social Media Sleuths. Community involvement is paramount to law enforcement’s success and the amount of tips that we receive daily on social media shows how much ownership citizens are taking in their own communities.”