American Horror Story fans have been waiting anxiously for any and every piece of information for the upcoming fourth season “Freak Show.”

What we know already: it will take place at a sideshow carnival in Jupiter, Florida during the 1950s. Sarah Paulson will be playing a two headed woman, Bette and Dot, which she tweeted a promo photo of in June. Jessica Lange will be playing a German ex-pat who is in charge of one of the last American freak carnivals. But now we know her name, as well as many others, and new characters, and oh my.

According to an Argentinian fan site, an unofficial leaked call sheet for the fourth season’s first episode has hit the internet in a big way. 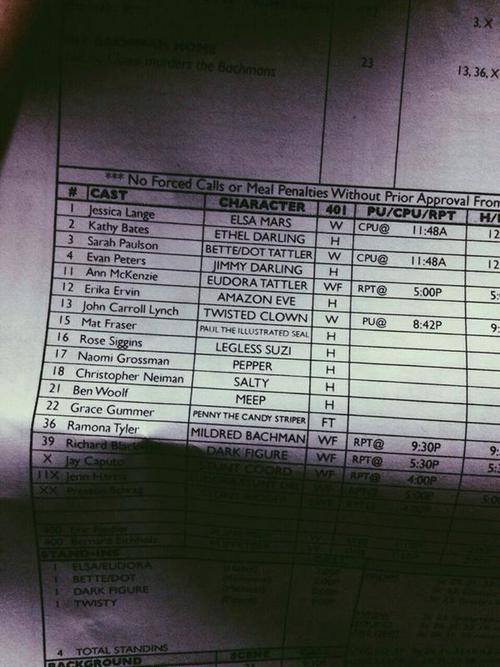 Jessica Lange’s will be “Elsa Mars,” while Kathy Bates (Ethel Darling) and Evan Peters (Jimmy Darling) have some type of family lineage. Mother and son? Naomi Grossman who played Pepper in Asylum is back with the same name, possibly same character?

FX and reps have yet to comment about this unofficial leak. The latest from Ryan Murphy was his announcement of Finn Wittrock joining the cast and this teaser photo of Paulson on set.

HOLY WHAT that was a bunch of new information. Who is pumped for the freaks?