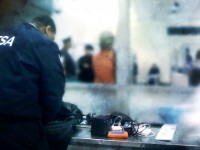 Officials suspect that the man had one too many drinks at the airport lounge before heading over to the security line where he started impersonating a TSA Agent. The man pulled two women aside, both foreigners, for a private security pat down.

Time reports that the man was wearing khakis and a blue polo shirt. He may have also been wearing a pair of blue plastic gloves that he stole from a real agent. The 53-year-old man reportedly walked through the security line and picked a women for a private pat down.

The two entered a private booth where the woman was screened. It’s unclear what happened in the booth because the woman rushed to catch her flight after the incident. The man was caught when he brought a second women into the booth.

The real TSA Agents finally caught him after they realized that a male TSA agent isn’t allowed to give private pat downs to women without a female agent present. The 53-year-old man was detained by police and charged with public intoxication. He could face additional charges.

This hasn’t been a good week for the TSA. A few days ago, a TSA Agent refused to let a passenger through security because they had an ID from “Washington D.C.” which, according to the agent, does not exist.

The US arms sale industry is large and successful. More than 30% of exported weapons in the world come from the United States. They supply to no less than 90 nations making it one of the largest suppliers of weapons in the world. The US makes an estimate of almost 200 Billion dollars in annual… END_OF_DOCUMENT_TOKEN_TO_BE_REPLACED

Now that the election results are almost final, we all want to ask what’s going to happen to Donald Trump after leaving the office? All US Presidents inevitably reach the point where they leave the White House.  Besides, the constitution states that all US Presidents are subject to a two-term limit. What do former presidents… END_OF_DOCUMENT_TOKEN_TO_BE_REPLACED

This is the first time in modern history that the US held presidential elections in the middle of a pandemic. In truth, the US elections may have overshadowed COVID-19 and the side effects are limitless. America is facing a tough crisis of discontentment with the current administration. An understandable case but a situation that may… END_OF_DOCUMENT_TOKEN_TO_BE_REPLACED