What better way to start off promo videos for a new season than in a creepy and terrifying way?

Creator Ryan Murphy does just that with season 4 of American Horror Story: Freakshow. On Sunday, July 13, the FX series put up the first teaser trailer for the upcoming season called “Fallen Angel.” In your first watch, you might not understand why viewers think it’s terrifying. Put it in full screen mode and watch closely to digest the creepy imagery.

The woman dressed in white stands up with wings behind her. The camera cuts to a man behind her operating the wings as a lever system that are stuck in her back as blood drips from them in the shape of a smile. 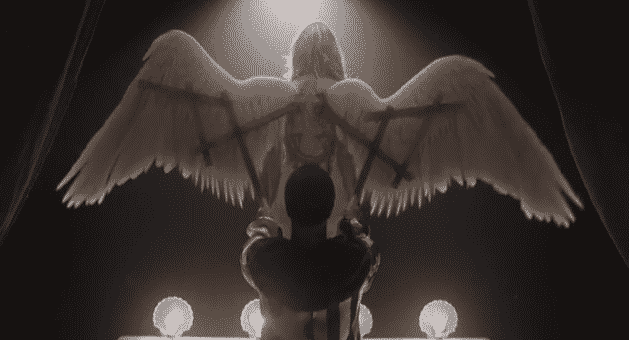 Murphy revealed earlier this year that Freakshow will take place during the 1950s in Jupiter, Florida at a carnival. Jessica Lange will be playing a German ex-pat and the boss of the sideshow. Familiar fames will return for this season as well: Sarah Paulson (with more than one head), Evan Peters, Frances Conroy, Kathy Bates and Angela Bassett.