Steven Spielberg Triceratops Hoax Is The Dumbest Hoax On The...

OK, internet, listen up. Steven Spielberg did not kill a triceratops.

Yes, apparently some people were fooled by a photo of Mr. Spielberg sitting next to one of the dinosaurs from Jurassic Park.  They thought that the director actually brought dinosaurs back to life and that he was hunting them on a secret island. 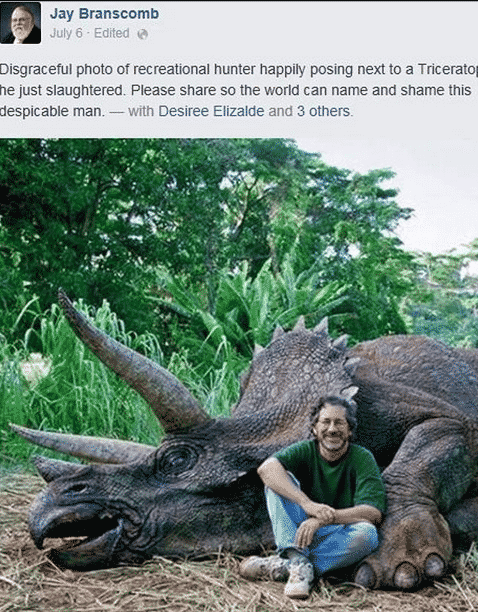 Seriously? The internet can be pretty stupid but this is just ridiculous.

One person wrote: “I don’t care who he is, he should not have shot that animal.”

Another added: “Steven Spielberg, I’m disappointed in you. I’m not watching any of your movies again ANIMAL KILLER.”

The photo was posted by a Jay Branscomb shortly after the internet got all riled up about Kendall Jones’ hunting photos. Some people were so angry that they forgot about logic and reason. When they saw the photo of Spielberg and the triceratops, they immediately got out the pitch forks instead of taking a second to think, “wait a minute, Triceratops are extinct.”

No, Steven Spielberg is not a dinosaur murdering fiend who deserves your contempt https://t.co/1GqbZS81qX pic.twitter.com/JT4s49eW2I

Now, this is either the dumbest internet hoax of all time or it’s just another example of trolls trolling trolls. Do you think these people really believed that Steven Spielberg killed a triceratops?

[“Steven Spielberg 1999” by Not stated – Licensed under Public domain via Wikimedia Commons.]