Often people complain about soccer having low goal scoring with games ending 1 – 0, 1 – 2, or ending in a tie at 0 – 0. Germany heard those complaints and raised civilization 7 World Cup goals.

In the Brazil vs. Germany game, tears were shed, cries turned to ugly cries, and fans even left the stadium. If you weren’t watching, the game ended Germany winning 7 – 1. Yikes. Just to reiterate the obvious, the World Cup is being played in Brazil. You can literally reach out and feel the awkward in the air.

Twitter used this opportunity for some prime #BRA tweeting:

I now totally understand the origin of the Brazilian wax. Literally nothing on the field. #BrazilvsGermany

Time for German fans in attendance wearing jerseys to slowly remove them and inconspicuously exit the stadium. 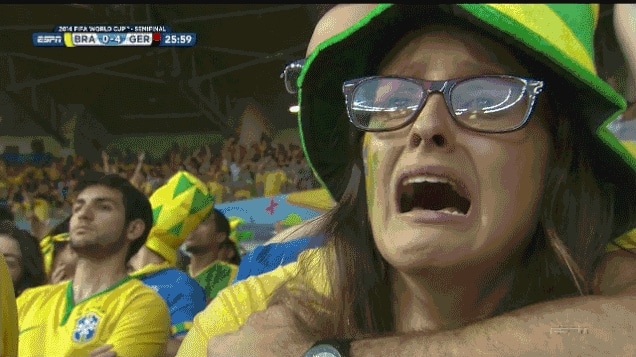