FIFA has issued takedown notices against Twitter accounts that have been using World Cup logos as avatars on copyright grounds.

The famously corrupt organizing body issued the takedown notices to Twitter targeting any Twitter account that used the World Cup logo, World Cup trophy, and other trademarked images relating to the World Cup and FIFA itself.

The demands fortunately didn’t ask that the Twitter accounts targeted be taken down, only the imagery in use on each account. 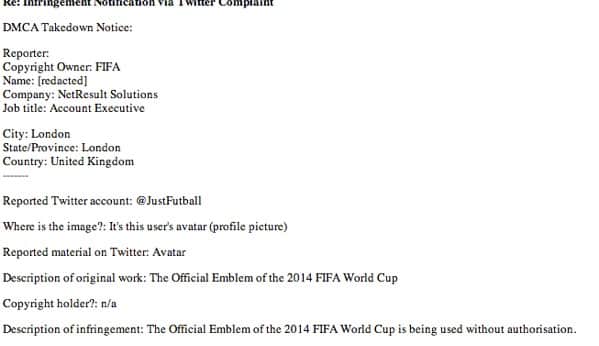 FIFA said in a statement, reported on TorrentFreak, that:

“Any unauthorized use of the Official Marks not only undermines the integrity of the FIFA World Cup™ and its marketing programme, but also puts the interests of the worldwide football community at stake…FIFA’s official logos, symbols and other graphic trade marks may not be used on any social media platform. FIFA’s Protected Terms may not be used to create the impression that a page is officially related to the 2014 FIFA World Cup.”

At the time of writing the accounts targeted remain up, but avatars and imagery has been replaced by default Twitter images.

You can read the full complaint on Chilling Effects here.