Um, American Apparel… Those aren’t fireworks? The clothing company thought it was posting a picture of fireworks for the fourth of July but it was actually a picture of the Challenger spacecraft shortly after exploding in 1986.

American Apparel posted the image with the caption “Smoke Clouds.” The photo remained on its Tumblr page until users pointed out that the photo was actually of the Challenger explosion. 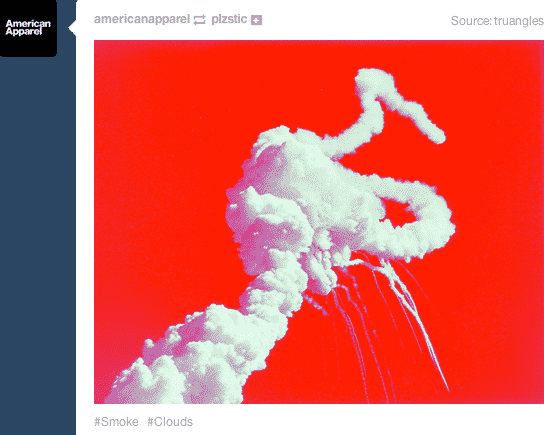 One person wrote: “This is the iconic image of the Challenger space shuttle exploding. Not just some cool smoke and clouds.”

The clothing company apologized for posting the insensitive photo and then explained that a young employee who didn’t know about the disaster was responsible for the post.

The company writes: “The image was re-blogged in error by one of our international social media employees who was born after the tragedy and was unaware of the event … We sincerely regret the insensitivity of that selection and the post has been deleted.”

With our sincerest apologies: pic.twitter.com/BOF43jScV0

Seven people were killed when the Space Shuttle Challenger exploded 73 seconds into its flight on January 28, 1986. The Challenger disaster grounded space flights for nearly three years as new laws and regulations were passed to ensure that future flights would be safe for all of those on board.

Do you accept American Apparel’s apology? Hopefully this kid doesn’t get fired for this. It was definitely insensitive to post a photo of this tragedy with the caption “smoke clouds” but it seems like an honest mistake.