Around noon on July 3, Chris Colfer sent a tweet saying he was fired from the hit show Glee for personal reasons and more information was to follow. 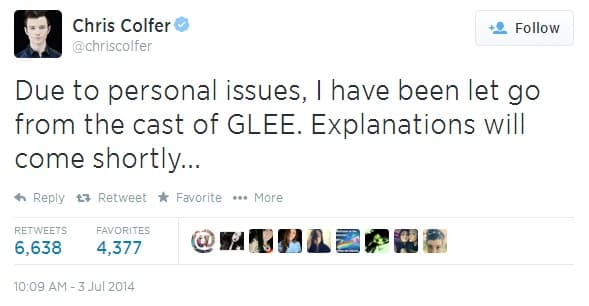 Basically, Gleeks were freaking out and really pissed at FOX. Fear no more!

According to The Hollywood Reporter, Colfer’s manager said Colfer’s Twitter account was hacked. That he was currently on a mid-Atlantic flight with no wi-fi, preventing him from tweeting at all. 20th Century FOX has confirmed the Twitter hacking”

“We’ve been alerted that Chris Colfer’s Twitter account has been hacked. Rumors of his dismissal from Glee could not be further from the truth. We love Chris and look forward to working with him again this season.”