If you haven’t seen a haggard prematurely ageing red headed drug f*&k in the game before, neither has anyone else.

Lohan claims in her complaint to the New York Supreme Court that the character pictured to the right in the following shot is based on her, and wants money in compensation. 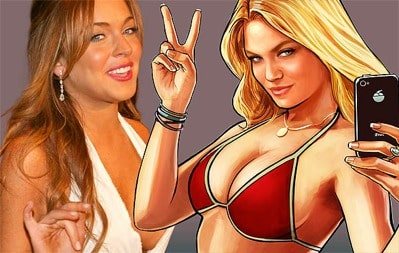 the “game features a mission where the plaintiff’s look-alike asks another character to take her home and escape the paparazzi” and features a character sporting the same “likeness, clothing, outfits, clothing line products, ensemble in the form of hats, hair style, sunglasses, jean shorts worn by [Lohan]…before the release of the GTA V video game.”

Because you know a gorgeous character in a video game who wears bikinis and often dresses sluttily is immediately a take off of Lohan…. not.

Lawyers though may be confusing the character of Lacey Jonas with this guy, who has a much more noticeable likeness to Ms Lohan. 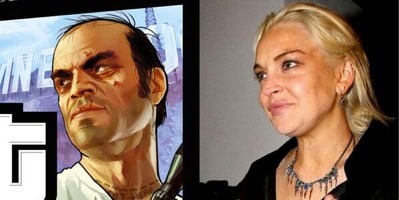 A date for the court hearing has not been set.