San Francisco has developed a strange tradition to celebrate a World Series win. Just like in 2010 when the Giants won the Series after a tense back-and-forth, 2012 has seen the people of San Fran taking to the streets to celebrate like an army of drunken huns.

Yes: stuff was on fire, people were hurt, riot police were called, cars were trashed, and “the city of love” proved once again that a more accurate description would be “the city of violence” or at least “the city of morons” when it comes to sporting events.

Oh, this isn’t just our opinion. All across Twitter many a San Fran folk celebrated the riot as it was happening, while others in the city and outside-looking-in merely shook their heads in shame. Here are some of the highlights from the San Francisco riot of 2012, including pictures:

My upstairs neighbors have decided to play music to drown out the cars honking outside. My apartment may implode. — Emily Price (@Emily) October 29, 2012

…and then someone decided to catch a bus on fire#SFRiotinstagr.am/p/RW6zUNuNvq/via @danieltiger — Emily Price (@Emily) October 29, 2012

Yeah, toke it up. 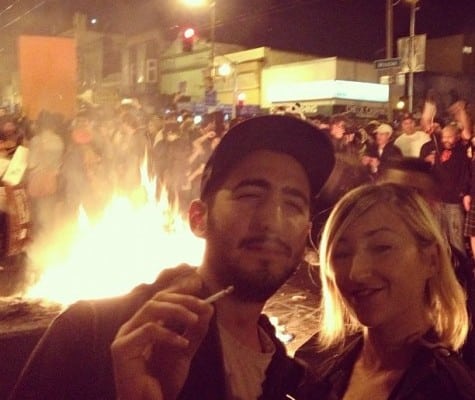 At least we haven’t lost our sense of humor:

People of San Francisco I implore you: as you shoot celebration/riot footage PLEASE hold your phone in “landscape” mode. For the children. — ed casey (@edcasey) October 29, 2012

This is why we can’t have nice things, San Francisco. instagr.am/p/RWtDmmoZYl/ — ed casey (@edcasey) October 29, 2012

No need for riot gear, San Francisco! This is the city of love! @ 24th Mission instagr.am/p/RHHGSMHb5_/

Can someone in San Francisco please explain why it’s trendy to set your city on fire to celebrate a World Series win? I don’t understand.

Riot continues. Why are we still here?? instagr.am/p/RWxZz_kGWM/

And here’s an awesome video to round out our report. Congratulations of pwning yourselves, San Fran.