How Social Media Can Make Your Business Competitive Internationally

by Noemi T 8 years ago2 months ago

Social media gurus are to be found everywhere you look, and due to that, some business owners might have had the feeling that social media is merely a hype, a bubble that can burst any time. While there might be a grain of truth to that, there is no denying that social media plays a critical role in business expansion, especially if you are looking at going beyond your geographical borders.

That is actually the beauty of social media: you can reach anyone, anywhere in the world without having to invest as much as you would have to otherwise.
Interush, a company that develops and markets unique digital products and cloud-based applications to empower users to more efficiently and effectively communicate over the Internet, emphasizes the role of social media for businesses:

“Social media is no longer just an option for corporations or organizations looking to market themselves online, it is now a necessity. A large majority are convening on social networks and a great number of businesses are turning to social media to acquire new customers or retain existing ones. It is imperative for businesses to have a social media presence, as its a one stop shop that allows corporations to connect with millions – even billions – of users for free, bringing in a considerably high return for low monetary investment.”

While that sums things up pretty neatly, let’s take a look at specific, compelling reasons you should focus on social media activities to aid your business’s international growth.

Investors are seeing the potential.

Social media presents real opportunity for investors, as is supported by a recently published study from ResearchMoz. This study takes a look at retail banks and how they are realizing that their customers are increasingly engaged in social media. As a result, banks are changing their own established business models in order to adjust to the habits of their customers, both current and potential.

The banking industry does have concerns – and valid they are – about the ROI of investing in social media. However, the study shows that the industry is open to the idea that there are more qualitative benefits to be had.

Social media is already being used by international businesses.

Social media is being used to facilitate international business,which is logical in an increasingly connected world bridged by social media. Consumers all over the world are on at least one social media platform.

They may have various reasons for this – using platforms as news sources, following their preferred brands for deals and offers, and even keeping updated on their favorite celebrities – but one thing is for sure: maintaining contact with family and friends will always keep people on social media platforms. Startups, in particular, are keen on leveraging social media, and international businesses are taking advantage of this as well.

Interush is an example of an international business that has benefited from social media. The business sees this in action with their communication and marketing applications.

Online consumer referral sales is one good case in point. People believe referrals from those they know somehow (or from someone who knows someone they know), and with social media, this reach is amplified. You may be based in the UK, but a person in China may interact with someone on Twitter who personally refers your business – and boom, you have a new customer halfway across the globe.

Additionally, you can take an active role by having social media writers  (or you can do it yourself) regularly posting/publishing on social platforms. There are several goals to this:

The ultimate goal, however, is to raise awareness of your business internationally.

Real businesses have jumped on social media to increase customer awareness, and you actually might have heard of some specific instances.

Remember the Super Bowl blackout? While others were quick to express their displeasure at the event, Oreo’s social media team were right on the ball with a single tweet. 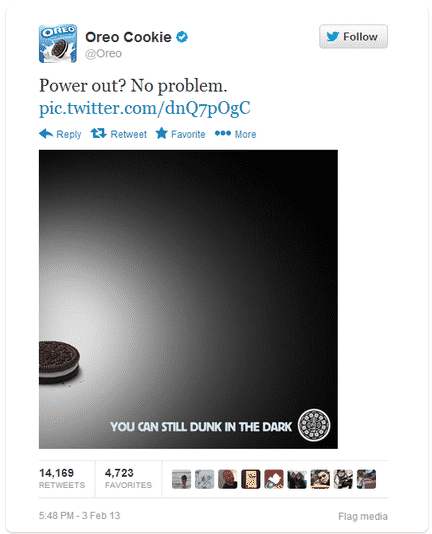 One tweet. Seen by thousands upon thousands, if not millions. Oreo certainly got a whole ton of brownie points for that.

Then there’s Grey Poupon, the U.S. mustard manufacturer. Everyone uses mustard, but it’s not such an exciting product, is it? The company took the high ground, though, and positioned itself as classy and exclusive. Instead of “begging” for Facebook likes, it actually screened people who can join their community. They created an app, which “assessed users profiles to determine how classy they were based on grammar, misspellings, art taste, education, music selection, movie choices, restaurant check-ins, cities visited, books read, etc. If you didn?t make the cut, Grey Poupon deleted your like.” As with the aforementioned tactic used by Oreo, this is another instance of how a company can generate attention and buzz using social media.

For a business, it’s imperative to establish a social media presence. There are a lot of platforms, to be sure, but some should have higher priority than others, simply because they have shown their worth to many businesses.

As Interush is quick to point out, “The fact that its role will expanded in the future is not surprising. These networks will continue to gain traction and users, as well as influence.”

These networks indeed continue to gain traction, and while their user bases may overlap, they do have specific audiences as well. For example, Pinterest and Instagram work best for images, so your presence in these networks should be focused on high-quality images – not only of your products, but other related ones as well. Twitter works well with links complemented by a catchy title or brief comment. Same thing with Facebook, but with the added value that images and videos bring.

Google Plus, on the other hand, is best for more in-depth interaction with people in your circles. Even better, you can create a community, which people can join and have their own discussions in. Google Plus may not be the most popular network among the cool kids these days, but it is where you can get a lot of conversations going.

How do you leverage these platforms to benefit your business?

First things first: make sure you have your pages/profiles all scrubbed up and ready to show off before you launch a campaign. Get the details right: from the profile photo to the timeline/background cover to the description.

Once you’re ready, it’s good practice to have an idea of how you are going to handle your posts/tweets. What kind of content are you going to share? When? How often?

In most cases, you will have to give it a try for a few weeks and then study the results. You can use tools to analyze which kinds of posts work best, what times your audience are most online, and so forth. Some of these tools are provided by the platform; others, which provide more in-depth information, are offered by companies such as Interush.

At the end of the day, you’ll probably find yourself doing some testing. You’ll even be making adjustments along the way. One thing is for sure, however: if you want to reach out to an international audience, you cannot ignore social media. Otherwise, you’ll get left behind.