The United States won a thrilling game against Ghana yesterday during the World Cup and Delta Airlines celebrated with a pretty ridiculous tweet. The airline posted a photo of a giraffe, representing Ghana, as they congratulated the Men’s US Soccer team on the victory. 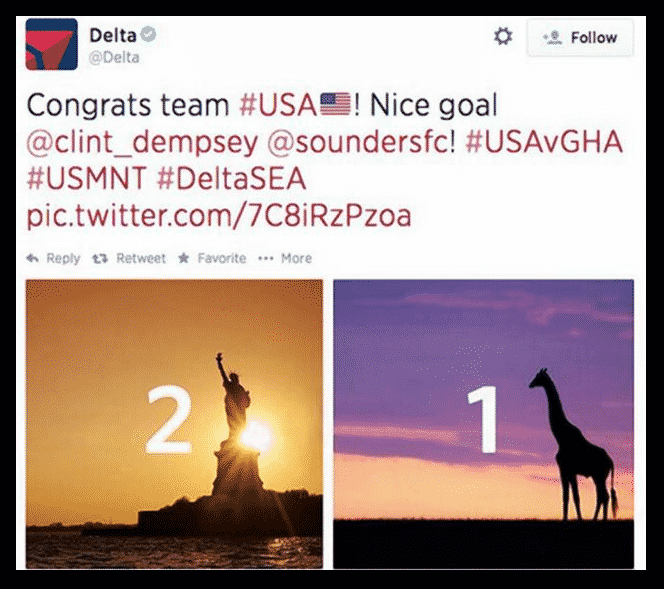 So what’s the big deal? Well, for one, Ghana doesn’t have giraffes. Delta just chose some random safari photo in order to represent the 25 million people that live in the West African country.

Twitter quickly jumped on Delta for making the mistake.

Can’t say I’m too surprised Delta doesn’t know where giraffes live. They think Atlanta is on the way to everywhere.

official score @Delta 0 Social Media Fail: 1 And we have our biggest #worldcupfail yet

WOW @Delta. With ALL the #Africa traffic & business you get, you think #Gha is only a SAFARI w giraffes?? Major business #travel #FAIL #US

Delta removed the photo after realizing their mistake and issued an apology.

We’re sorry for our choice of photo in our previous tweet. Best of luck to all teams.

The airline also released a statement saying that as a global company they have a responsibility to “create messages that are both accurate and inclusive. We take this responsibility seriously.”

Delta writes: “Last night, we posted a congratulatory message on Twitter and Facebook to the U.S. Soccer team on its win in a World Cup game. The message used an image of a giraffe to represent Ghana. The image was both inaccurate and inappropriate. As a global airline, we understand the role images play in shaping global perceptions. We also recognize our responsibility to create messages that are both accurate and inclusive. We take this responsibility seriously. Yesterday, we failed to meet this responsibility. For this, we sincerely apologize. We have removed the image and are reviewing our processes to ensure that future images and posts reflect both our values and our global focus.”