The World Cup just kicked off a few hours ago with the tournament hosts Brazil opening against Croatia. Social media is how a huge part of football from live reporting games to player rumors and Twitter will have a big presence at this year’s tournament. Many players are now on Twitter from the living room names like Ronaldo and Rooney to the not-so-well known ones and there have been quite a few gaffs by some of them over the years too.

We’ve put together a list of Twitter accounts for a player for each of the 32 teams at the 2014 World Cup, be warned a few of them do not Tweet in English though!

Zlatan Ibrahimovic – ‘Zlatan’ who refers to himself (and he refers to himself a LOT) is one of the best forwards in football today and scored one of the greatest goals I’ve ever seen, unfortunately he will not be at the 2014 world cup as Sweden did not qualify. Zlatan was almost not going to attend but a campaign was run in Brazil to change his mind and he is now on the way there. His Twitter account is one of the best in football that you can follow.

Neymar – The star of the show, Neymar is Brazil’s newest rising star and already has 2 goals under his belt after the opening game.

Oribe Peralta – is Mexico’s best forward and smashed in 10 goals in the qualifying tournament.

Samule Eto’o – The world famous striker who is now playing for Chelsea, clearly pumped to be at the World Cup. 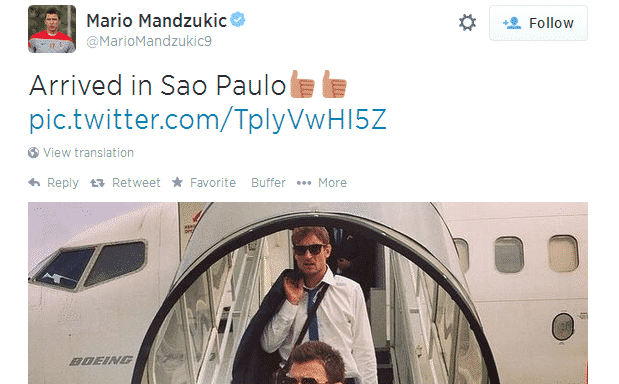 Mario Mandzukic – Croatia are never a team to write off, they may struggle after already losing their opening game though

Cesc Fabregas – The ex-Arsenal and Barcelona midfielder has just signed for Chelsea, at the last world cup he didnt get much of a look in the squad, let’s hope we see more of him this tournament.

You've only got #90Minutes to make your mark. https://t.co/wHvhQ2Dx2e pic.twitter.com/ezywH20zK4

Robin Van Persie – Otherwise known as ‘RVP’, scores bags of goals in the English premier league but has yet to make a mark on an international tournament.

Jorge Valdivia – “El Mago” (The Magician) is as much a playboy as he is a play maker but is also a fantastic forward and creative player.

Stage is set and enjoyed the session at the stadium. #Fearless #CahillBrazil pic.twitter.com/w7S5JNVHu2

Tim Cahill – The ex-Everton midfielder and forward is in the twilight of his career and now playing in the US and will be hoping to take Australia beyond the group stages in Brazil this summer.

James Rodríguez – Colombia are always a bit of a dark horse team at the world cups and can never be written off.

@KoloKolotoure28 My son met you at Melwood today, thanks for his pic, any chance of an RT for him please Kolo? #YNWA pic.twitter.com/ZlD7I0JhKB

Kolo Toure – Always been a fan favourite wherever he plays, he will be looking to get the Ivory Coast past the group stages this year

Keisuke Honda – Unfortunately it seems that NON of the Japanese team are on Twitter so the above unofficial account for their attacking midfielder Keisuke Honda is the best we can do!

Battle day is right around the corner and I'm ready for anything. Stay tuned! #GALAXY11 #GALAXYS5 @SamsungMobile pic.twitter.com/RbFOkEnEXn

Wayne Rooney – Ahh Wayne Rooney, scores likes its going out of fashion when he’s getting paid hundreds of thousands of pounds per week for Manchester United but never seems to manage it for England at Tournaments.

Perhaps if he wore this suit it would help?

Mario Baloteli – ‘FinallyMario’ no its not the latest Nintendo Wii game but Italy’s controversial striker, he got his team to the final at the Euro 2012 tournament and even had a meme go viral

Xherdan Shaqiri – Doesn’t always get first team action at Bayern Munich but will be a starter for the Swiss team for sure.

Jefferson Montero – A left winder and show boater player, just the kind we like to see at a South American World Cup!

Bacary Sagna – An integral part of Arsenal’s defence in the English premier league, although France aren’t up their with the contenders they can never be written off.

Andy Najar – Fun fact Andy was smuggled into the USA by his parents when he was only 13 years old!

Sergio Aguero – Just had another fantastic season with Manchester City and picked up his 2nd Premier League trophy, Argentina are one of the top four teams to win the cup this year.

The #WorldCup begins! It's time to stop dreaming and start playing. #allin or nothing pic.twitter.com/dkuI6Eiq3o

Edin Dzeko – Another Manchester City player, although Bosnia are very much an underdog team, with a bit of luck they should be able to grab 2nd spot.

Reza Ghoochannejhad – Plays for Charlton in the UK, raised in Holland and the new star for the Iranian team, one to watch this tournament.

about to take off see you in brazil #nigeria https://t.co/1qN5KKo17B

Victor Moses – Nigeria always have a strong presence at the world cup and Victor Moses will be looking to make an impact.

Cristiano Ronaldo – Even if you don’t follow football or ‘soccer’ there’s a good chance you have seen Ronaldo on Gillette advertisements. One of the game’s biggest names, although Portugal don’t have a team to win it they are always going to be a threat and you can expect Ronaldo to be having a big impact this tournament.

Bastian Schweinsteiger – Schweinsteiger! Is it me or does his name sound like a swear word in German (something that’s never happened before with German players right), joking aside this guy is one of the best midfielders at the World Cup and in one of the strongest teams, expect them to go very far.

Michael Essien – In the last year of his career now and only just made a come back to international football. ‘The Bison’ as he is known can play in just about any position “aside from goalkeeper or striker” according to his club manager Jose Mourinho.

Tim Howard – A solid presence in between the sticks for team USA. They have a real uphill battle in this group though if they want to qualify. 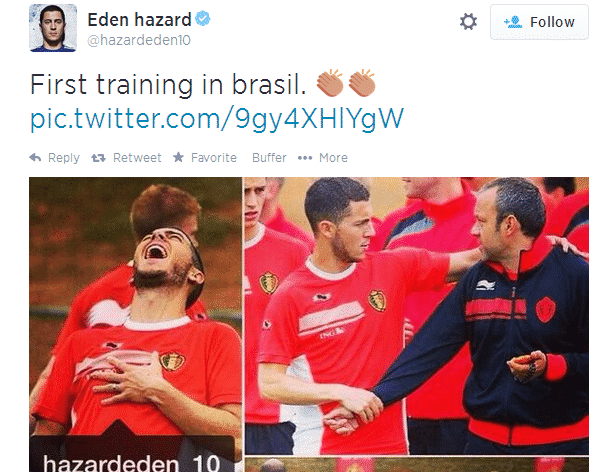 Eden Hazard – Another top scorer from the English premier league, Eden Hazard makes up the attack for a Belgian team that looks like it could cause some upsets in Brazil.

Aleksandr Kokorin – I think Aleksandr isn’t really into Twitter, my own Grandmother has more followers than him!

Riyad Mahrez – Part of Leicester City’s newly promoted team. Algeria could cause an upset in this group.