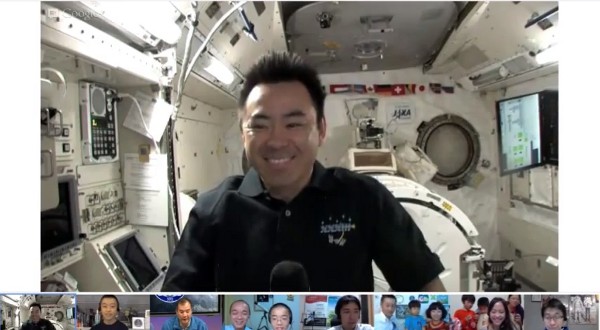 JAXA, the Japan Aerospace Exploration Agency, teamed up with Google to host a Hangout On Air from the Space Station. The technology is pretty amazing and Japanese astronaut Akihiko Hoshide was the person on the other end.

This was the first ever public Hangout in space. Surprisingly, astronauts have been using the technology while stationed, but previously for private chats, not public.

Akihiko answered questions from those in the Google+ Hangout On Air and interacted with kids who seemed very excited. Overall, the video chat lasted just under 20 minutes. There was a slight delay to the Space Station, but when you’re doing a live video chat from space, you don’t get hassled.

As far as JAXA doing another Hangout On Air from space, there’s been no official word yet. Since there are several astronauts on the Space Station at any given time, it would be cool to see Hangouts happen more often.

You can watch the chat below by skipping to the one hour, 15 minute mark.

The moment he was inaugurated, immediate changes made by Biden made headlines across the country. These are many of the controversial issues and topics that were shunned and ridiculed by the former administration. Americans can finally breathe a sigh of relief that these concerns have finally reached government policies. It seems clear that Biden has been… END_OF_DOCUMENT_TOKEN_TO_BE_REPLACED

Presidential pardons are one and many in the history of the US. There are many times when US Presidents granted reprieves for their citizen’s misdeeds. The US President may grant a pardon for any individual, including himself, for any crimes done against the country and its citizens. This issue of Presidential pardons has been trending… END_OF_DOCUMENT_TOKEN_TO_BE_REPLACED