An image alleging to be a post by Facebook Founder Mark Zuckerberg has been making the rounds online recently and many have been sharing it in hopes of preventing the alleged video advertising plan laid out in the “post.”

The image, which you can see below, has been posted by several sources (some malicious, others naive). The one I came across had already gathered over 600,000 shares. It, while purporting to be a post by Mark Zuckerberg laying out plans for Facebook’s new video advertising plans, is actually an image. 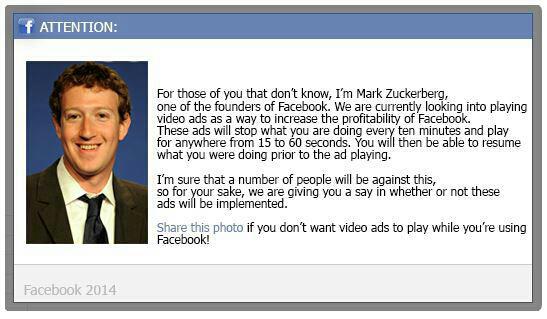 Like any good hoax, this one includes a bit of truth to it. Facebook is planning on testing a video advertisement system, but it is not the one described in the “post.” In the real version video ads will likely play on either side of Facebook News Feed, but they won’t stop anyone from using Facebook and the plan is to have them show no more than three times a day. That is enough cause for legitimate outrage, but it certainly isn’t to the level described in the fake post.

A few things should tip you off right away. First, even if Mark Zuckerberg was going to put what would obviously be an unpopular decision to a public vote, it doesn’t make sense to share a photo of a post instead of the post itself.

You can go to Mark Zuckerberg’s profile and see that no such post exists.

Some have speculated that the photo is meant as satire, which seems to me to be a convenient excuse to act artistic while scaring people into sharing your photo.

So no, Facebook isn’t planning on playing an inescapable video ad every ten minutes. What they are doing might be enough to make you mad, but you can’t share a photo to make it go away.