Most hoaxes aren’t entirely credible at face value, but we’re sympathetic to the fact that an untrained eye frequently has trouble sorting them out before they click or share. It’s why we do what we do here at Social News Daily. But a new crop of Facebook hoaxes threatens to put us, and other hoax-busters like us, completely out of the job.

Why? Because they’re so damned obvious.

Malwarebytes and others have reported on a number of fake paranormal videos that have gone viral on Facebook in recent days. It’s not just one post; there are several, and it is unknown where they originated from (or even if they all originated from the same place).

Most of the paranormal posts promise footage of a ghost attack, a video of an Aswang (a vampire/werewolf type thing from the Philippines), footage of mermaids, and a clip of a great white eating a sea captain. 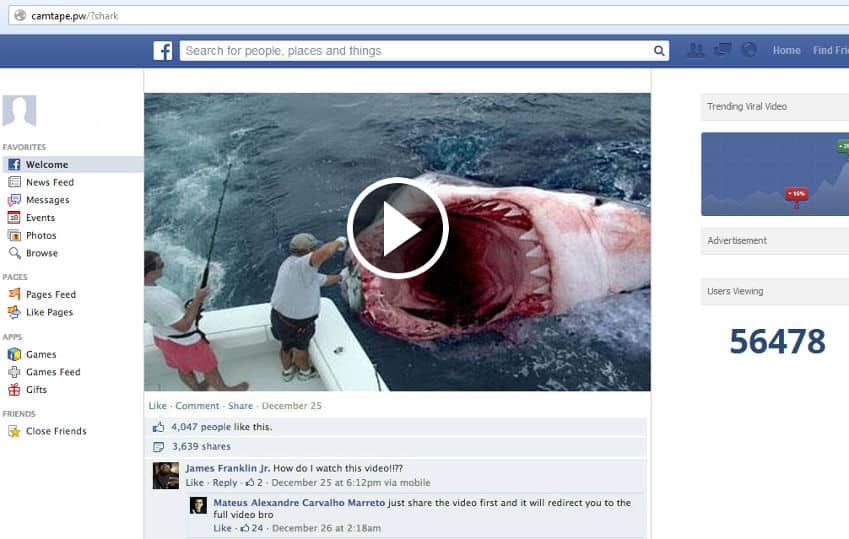 Hopefully, you’re not reading this because you accidentally clicked on one. They’re all classic phishing scams. Instead of opening the promised content outright, these posts redirect users to pages that ask them to download software so that they can watch the videos. It’s all malware, and it will fuck your Saturday up.

Here’s a rundown of what Malwarebytes found with each paranormal post:

I’m sure you were smart enough not to click, because Social News Daily’s readers are some of the most well-informed, intelligent and good-looking people on the Internet. If you clicked because you were looking for some spooky shit, here’s the paranormal video that some of the hoax posts pulled screenshots from:

“Facebook Hoaxes Are Getting Weirder Lately, Paranormal Crap Regularly Going Viral” is part of Social News Daily’s “Hoaxed” series which debunks viral social media hoaxes. Hit the share buttons on the left, or check out more from the series in the “Social Communities” tab up top.