Explore Your LinkedIn Connections: LinkedUp! App Lets You Hook Up

Have you already found your dream job using LinkedIn? How about using the platform to also find your future Mr. or Mrs.? That’s the idea behind the recently launched LinkedUp! app. If history is any indication, this app will soon find itself without a leg, or API, to stand on, but for now it’s worth examining.

The app is a cross between professional networking and Tinder. Users can filter potential partners by job industry, age, proximity and gender. If two users signal interest they are matched and begin to chat.

28-year-old founder Max Fischer chose LinkedIn because LinkedIn data “is going to result in much higher-quality matches.” Fischer tells the Wall Street Journal, “people get a really true sense of where someone’s from, what they do, and where they went to school, which are the main questions people ask in terms of dating.”

LinkedIn is refusing to comment on the LinkedUp! app, which doesn’t bode well for its future. At the same time, unlike other “hook up” apps which have been banned, this third-party solution actually makes a lot of sense. I don’t plead very often in news stories, and as a married guy I have no personal use for this app, but I seriously hope LinkedIn let’s this app grow. Besides, online dating is one of the internet’s biggest businesses and therefore it brings a good bit of functionality to LinkedIn.

Take a look at Silicon Valley, the finance sector, and other high pressure industries, and it’s easy to find stock brokers, and other employees who work 18+ hour days. Why not look for someone near, or even on your corporate campus, and develop a relationship? I personally love the idea of sorting people by industry.

The app launched in March and the user base has already doubled. The LinkedUp! App is looking to push for higher traction in top download areas including New York, Los Angeles and San Francisco. 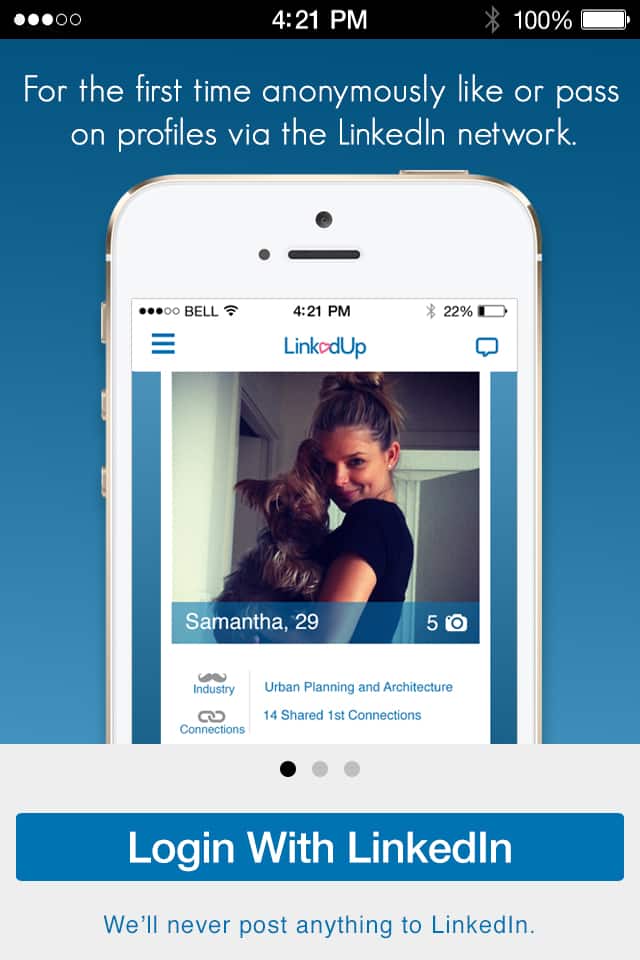