Australian Cash And Prize Giveaways Facebook Page Is A Like-Farming...

A new like-farming scam aimed at our friends down undah is giving away new cars and giant bags filled with what appears to be drug money. All you have to do is “like” any given post for a chance to win, as well as the page, “Australian Cash and Prize Giveaways.”

It’s not even a very subtle like-farming scam. Every post (since page creation on March 24, there are nearly two-dozen) merely tells Facebook users to “like to win” and promises that more prizes will be given away in the future if you like the page.

The page itself is pretty bare. Set up as a “community,” the page doesn’t have any description or admin messages, which means that whoever set up the page didn’t even go through the trouble of creating a fake “story” to lend credibility to it.

But why should they? Many posts on “Australian Cash and Prize Giveaways” have over 100 shares and over 1,000 likes and comments, which goes to show that very few are actually checking out the legitimacy of the page. Many commenters on each post are doing their best to point out the inherent hoax-ness of it all, and we salute them. Still, these posts continue to be shared and liked.

Oh, and the bit up top about “drug money” wasn’t just a joke. Another blow to the legitimacy of the page is that those photos are from Australian publications — specifically, stories about drug raids (here) (here). 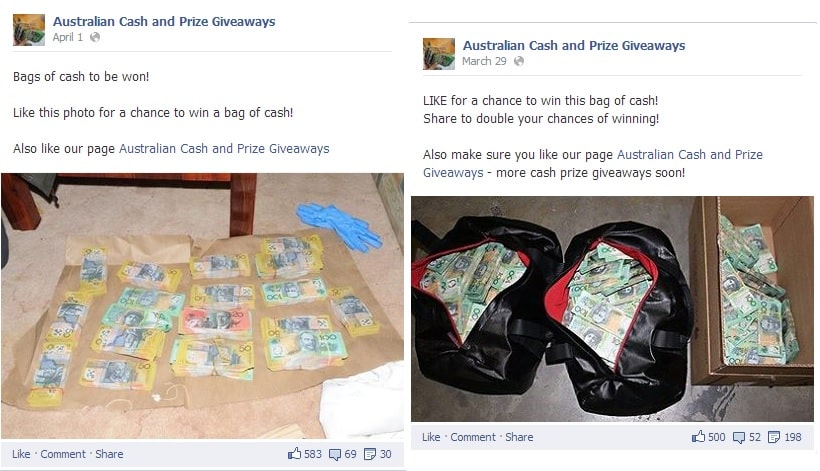 Reminder: Like-farming scams are designed to drive up engagement and likes on Facebook for nefarious purposes. Facebook pages with a high number of fans are very valuable, and either continue to be used to ply various scams or are simply sold (with their built-in audience) on the black market to the highest bidder who then scrubs the page and puts in whatever content they want.

According to Hoax-Slayer, while Facebook hasn’t been the best about shutting these scams down, hoax reporting has resulted in some of these pages being banned, so don’t be afraid to point your pals back to either them or us if you spot them falling for this crap.

And remember, a lot of people do. “Australian Cash and Prize Giveaways” has over 5,000 fans as of this posting, and some naive commenters are already asking how and when they’ll be notified if they’ve won.

“Australian Cash And Prize Giveaways Facebook Page Is A Like-Farming Scam” is part of Social News Daily’s “Hoaxed” series which debunks viral social media hoaxes. Hit the share buttons on the left, or check out more from the series in the “Social Communities” tab up top.