No, The Rock Is Not Dead, Back To Your Regularly...

Contrary to what you read on Facebook, Dwayne “The Rock” Johnson is doing just fine. Unless we’re talking about the Scorpion King franchise.

But seriously, The Rock is alive and well, despite what the latest death hoax/possible phishing scam going viral on social media may claim. Malwarebytes Labs spotted the hoax, which claims that The Rock died during the filming of Fast & Furious 7, on Facebook this Wednesday. The post asks users to share the video, which reportedly shows The Rock’s death, before watching it.

God help you if you did.

If you did click, you’re sent to a link which installs the software program PUP.Optional.Bandoo on your device. Malwarebytes Labs didn’t explain what the program does (they just dubbed it “potentially unwanted”), though they pointed out that the program is disguised as a Facebook plugin of some sort. 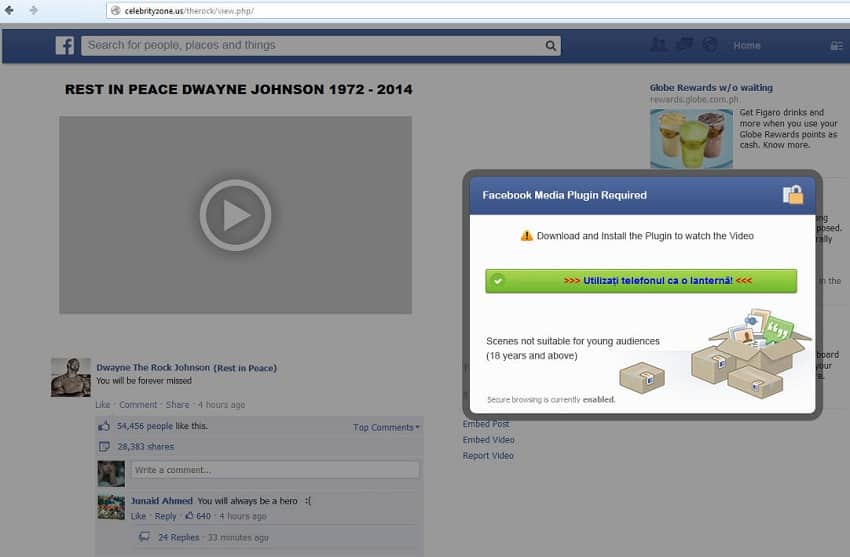 Another note – The post appears to have a static 2,367 comments when you compare screenshots taken by Malwarebytes Labs days ago to the actual page hosting The Rock death hoax today (be careful where you click when you open that link).

Look a little closer and you’ll see that you can’t actually interact with those comments (whether by liking or commenting yourself). This means that the comments were most likely screencapped from other pages, and thus, are not organic to this page. They’re copypasta’d, and merely meant to lend to the appearance of an authentic viral post.

We don’t know who started the hoax (or even exactly why), but rest assured, The Rock is just fine.