Google Social Login Use At Highest Level In Over 3...

by Mike Stenger 8 years ago6 months ago

Social login data from Gigya yesterday revealed Facebook was still in first place, and the latest trends report from Janrain helps to support that data.

However, according to Janrain, Google isn’t nearly as far behind at 38 percent market share, compared to Facebook at 42 percent. 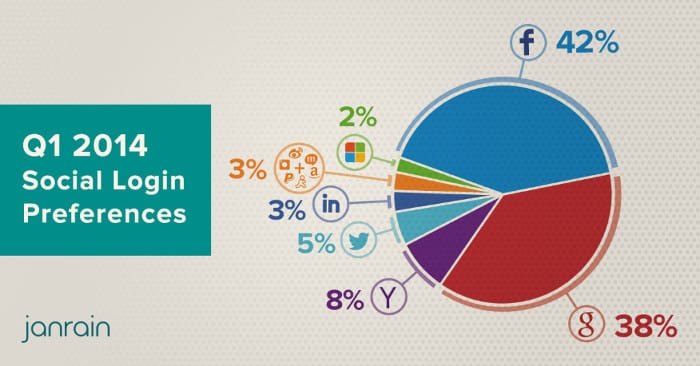 Here’s the complete breakdown for the first quarter of 2014:

At 38 percent, Google social login use is at its highest in 3 and a half years, which is thanks in part to the growth of Google+.

“What accounts for this rise in popularity? The continued emergence of Google+ certainly plays a role. In addition, Google has made a strategic push to unify each of its services (Gmail, Google+, YouTube, Drive, Android, Play, to name a few) under a single Google identity. Consumers are using a single Google identity to access each of these services, which may have a positive impact on the value and equity they place in that identity.”

Janrain also says that Yahoo saw its largest social login increase in four years over the past quarter.

“This success may be coupled with a renewed vision toward promoting its own identity and growing consumer affinity for the company through rich media content.”

Across media, retail and consumer brands, Facebook, Google and Yahoo social logins see the most use, while Twitter slowly emerges in third place among entertainment and music sites.

On B2B sites, Google has surpassed Facebook and LinkedIn as the number one option. 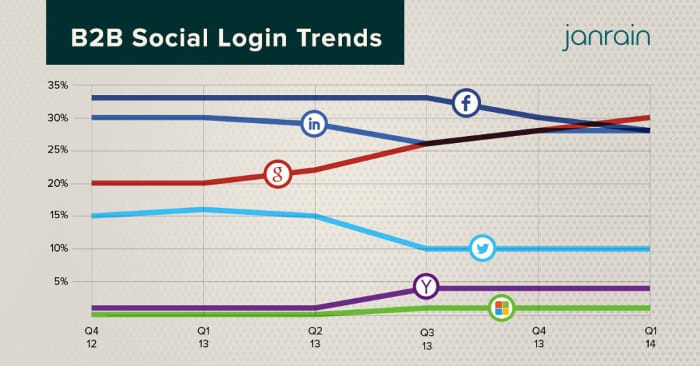