by Amanda Peterlin 9 years ago10 months ago

Abracadabra will soon be a thing of the past. The new magic word will be “AH CHA!”

How do you keep the magic alive? Sometimes it’s Santa Claus, the Tooth Fairy, or pausing capability on your TV. These parents decided to play a practical joke on their son making him believe his wand was pausing and playing the television. Seeing the little boy’s eyes light up in amazement at the wand’s capability to control the big TV was endearing. Pure astonishment and wonder. 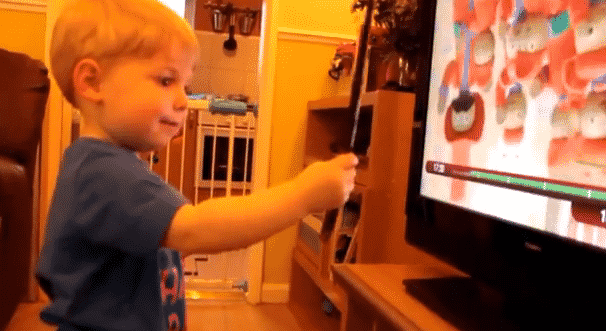 The YouTube channel called More Cars Please uploaded a new video on April 15 that has already gotten over 140,000 views. The video titled “You’re a wizard!” is only the second video from this channel. With only 19 subscribers, this adorable trick will be solely responsible for all future traffic.

So far, the video has received 400+ thumbs up and only 20 thumbs down. More Cars Please seems to be very child-oriented with subscriptions to other kid-friendly channels. With “You’re a wizard!” getting more and more views in each passing hour, who knows what to expect from this channel in the future.

Let’s all imagine some time in the future when these parents try and watch a movie but their son brings in the wand and they have to stop and start it for the next 20 minutes. This trick may backfire on them but the cuteness in this video is overflowing.