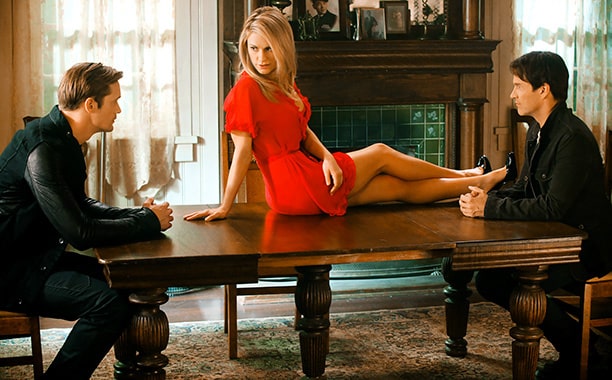 A True Blood tease was offered to fans as an Easter Monday treat, giving the show’s slightly addled and massively confused fan base a look into how the game changing seventh and final season may pan out when it hits HBO screens in June.

In the clip tease, True Blood fans get a glimpse into what might be in store as the show wraps in its final go-round early this summer.

If you’ve yet to see True Blood‘s Season Six ending OR you haven’t read the books, SPOILERS ARE BELOW AND STOP READING.

No really, quit it. It makes Bill and Eric pissy when you don’t listen:

When we left the gang in Bon Temps, Eric had gone off mourning his vampire “sister” Nora … and, it would seem, was caught short on a snowy, sunny mountainside as the effects of fairy blood dissipated suddenly, leaving him bare (oh, so very, gorgeously bare) to the elements. Quel horror!

The vamp camps had also been liberated, but we imagine the heightened anti-fanger sentiment remains … leaving Bon Temps and its surrounding environs open to some dead vs. living entity static.

In the trailer, no Eric was to be seen, clothed or otherwise (more’s the pity.) A typically emotionally fraught Sook was rallying her friends and countrymen to quit killing each other, and some backlash or other was wracking the sleepy parish once again.

Fans of the books know that the series finale will represent a large divergence from the book trajectory. While the show and the series of novels had dovetailed loosely point by point, the books went on to number a dozen or more (depending on whether you count anthologies), and the show is stopping in its seventh season. (Many fans of Charlaine Harris, including your humble narrator here, suspect the novels’ anti-climactic ending may have prompted the show’s premature demise.)

Whether the True Blood tease from Season Seven above is an indication the show’s going another way entirely or just a confusing mish-mash of scenes from an otherwise book-based foray remains to be seen, but we still have to wait until June to find out if Eric lived … and if the show’s creators will give us the greatest bit of revisionist fanfic ever to hit the small screen. Fingers crossed, trubies!

The world is devastated by the news that Britain’s Prince Philip, the Duke of Edinburgh, has died at the age of 99. Palace media confirms that the Duke has expired mid-day today, April 9th. The announcement did not contain any specifics on the cause of death. The United Kingdom will enter a state of national… END_OF_DOCUMENT_TOKEN_TO_BE_REPLACED

Who would have known that religious prophets would be among the most loyal supporters of former President Trump? In fact, it has been observed that the most conservative Christians may have been the right amount of push for Trump’s presidential win back in 2016. Since Trump’s election back in 2016, numerous self-proclaimed “prophets” have been… END_OF_DOCUMENT_TOKEN_TO_BE_REPLACED

President Biden falls and slips multiple times on the Airforce One Steps and PEOPLE ARE GOING CRAZY! What’s the big deal? Some people are hating, while others are making memes just for the fun of it. We are all human, aren’t we? Everyone’s expected to stumble some time in their lives. However, with the internet… END_OF_DOCUMENT_TOKEN_TO_BE_REPLACED