Pinterest accounts for nearly 25 percent of all social sharing, and according to new data from Shareaholic, traffic referrals grew 48 percent from December 2013.

Today, the company published its quarterly Social Media Traffic Report, and while Pinterest saw the most growth, it’s still ranked in second behind Facebook.

From December 2013 through March 2014, Shareaholic analyzed data from over 300,000 websites with a combined monthly unique visitors of over 400 million.

Facebook saw a 37.65 percent increase, but is number one in social media referral traffic at 21.25 percent, nearly three times higher than Pinterest’s 7.10 percent.

Twitter came in third, however, is barely pushing one percent of overall share at 1.14 percent, and saw just a 1.59 percent increase over the recent four month period. 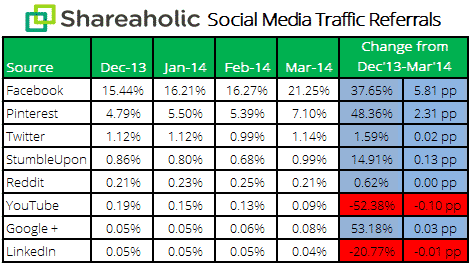 While Google+ is still ranked towards the bottom at only 0.08 percent, it saw the largest growth of any social network at 53.18 percent.

There were only two losers out of the bunch, YouTube and LinkedIn, who saw a 52.38 percent and 20.77 percent decrease respectively.

“While brands enjoy hating on Facebook for limiting the reach of Pages and then forcing businesses to pay for ads, Facebook still continues to refer loads of traffic to websites when users share links they enjoy with all of their friends.”

It’s a bit of a catch-22 for brands, and the numbers make it difficult to leave Facebook out of one’s social media strategy.