Celebrity photographer Terry Richardson has what you might call a dual reputation. On the one hand, he’s an incredibly respected artist of whom every A-lister he’s ever worked with has nothing but praise for. On the other hand, several lesser-knowns have accused him of all manner of sexual perversity known to man. It is the latter that finds us here today.

Model Emma Appleton tweeted a text message allegedly sent by Richardson asking her for sex in exchange for premium booking in Vogue: 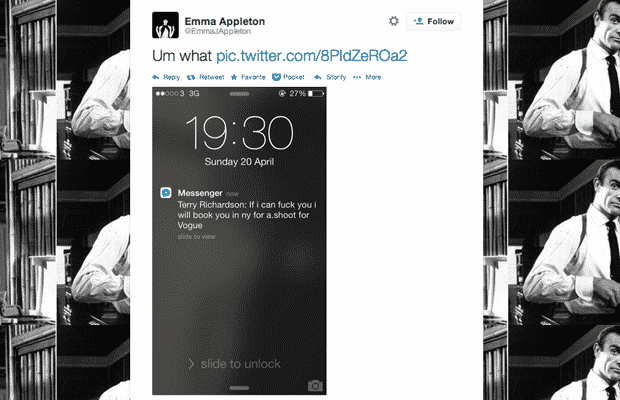 The tweet has since been deleted, with Appleton saying in follow-up tweets that she wishes she hadn’t shared the screenshot. As of Monday, her account has apparently been disabled or deleted. 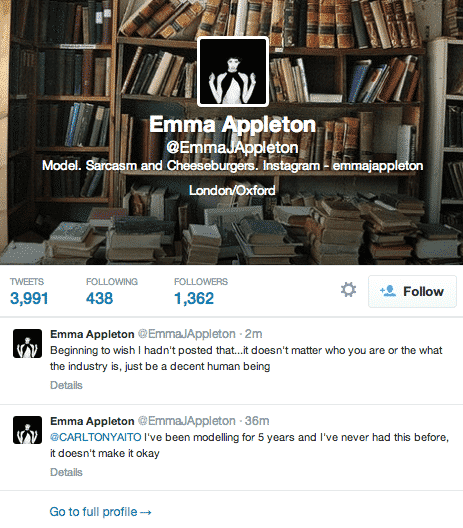 Richardson’s work has always been controversial, and the photographer himself has been accused of sexual assault on a number of occasions throughout his career. Though numerous models have leveled serious (and detailed) accusations against him, he does have his defenders. Though his work is often sexual in nature and sometimes graphic, model Noot Seear denied that he pressures models into doing anything they’re not comfortable with.

Richardson himself has responded to the variety of accusations against him over the years. In an open letter at The Huffington Post in March, he said:

“Sadly, in the on-going quest for controversy-generated page views, sloppy journalism fueled by sensationalized, malicious, and manipulative recountings of this work has given rise to angry Internet crusades. Well-intentioned or not, they are based on lies.”

Terry Richardson hasn’t responded to the most recent allegations, though Appleton did offer the following explanation on Instagram:

Additionally, Appleton’s actions have received a groundswell of support on social media:

@ladygaga it’s about time to use better judgement and rid yourself of Terry Richardson. This guy is creep: https://t.co/toCnw4kRrf

Emma Appleton is amazing to shine a light on an industry where abuse of impressionable young girls is meant to be hidden or tolerated! — Jack Roth (@JackR0th) April 21, 2014

It’s really good to see the overwhelming support for Emma Appleton, you are very brave and did the right thing, don’t doubt yourself!

Emma Appleton had to delete her twitter after posting the Richardson screen shot because of abuse. aren’t ppl just the best, eh? — Diane (@dipod) April 21, 2014

Emma Appleton is one gutsy chick. Good for her. If @voguemagazine has any sense they’d hire her & a legit director. — Juan Salvo (@j_salvo) April 20, 2014