The #CreepyWhiteGuys hashtag has sparked a pretty big debate on social media about race, sexuality, and, well, creepy white guys.

The hashtag seems to stem from the Tumblr blog Creepy White Guys. The site is dedicated to some of the rude messages women have received on online dating sites.

“Every Asian girl who has ever tried online dating, whether on POF, OKCupid, or Match has experienced it: messages from Creepy White Guys with Asian fetishes. I just got back into the dating scene and am already being bombarded with some absolutely horrifying messages.”

The blog is full of screenshots from OKCupid and other dating sites showing just how creepy some guys can be. The scary thing is that most of these guys seem pretty oblivious to how offensive they are being. One post even makes a point to clarify that he has Asian fever, not yellow fever, because that would be offensive. The same poster also goes on to mock Asian men while fetishizing women of color. 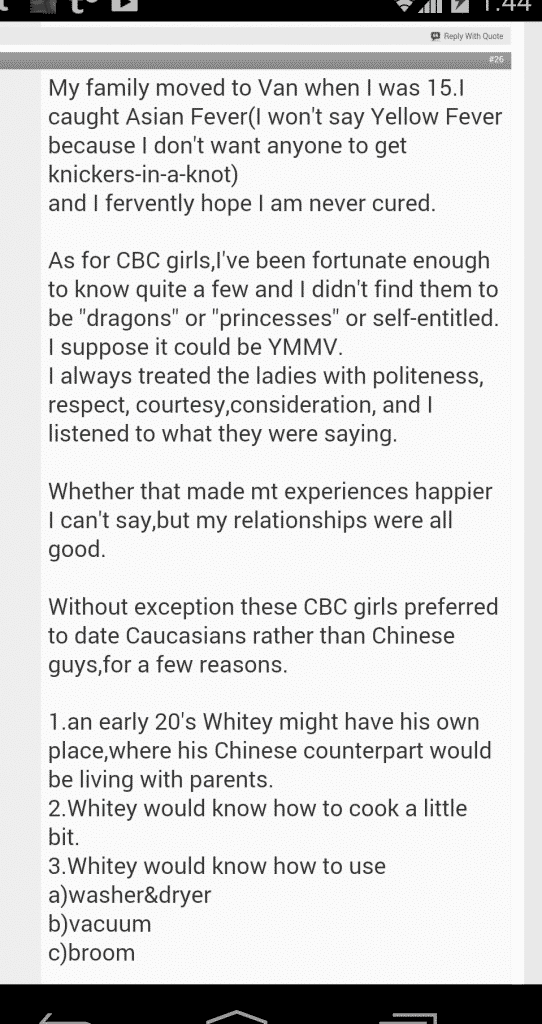 Of course, this problem doesn’t only effect Asian women. I know it’s hard to imagine but the reach of Creepy White Guys extends into all cultures of women (and men).

As a teen I was propositioned by cops and others in authoritative positions. #CreepyWhiteGuys

On #CreepyWhiteGuys, I just read a message that actually, legitimately read, "I'm a white guy for God's sake, shouldn't all of you like me?"

The #CreepyWhiteGuys hashtag was started as a way to talk about sexual harassment and racial stereotypes. The stories being shared on the Tumblr page are offensive and sometimes scary. Apparently, the stories are also offensive to white guys.

Plenty have people have taken to Twitter to call out the people using the hashtag. The biggest complaint is that the hashtag singles out one specific group of men (white men) and is therefore racist.

Of course, we could also complain that the hashtag is “Creepist” and is biased against people who are creepy.

The Creepy White Guys hashtag may be offensive to some people but, well, just about everything is offensive to someone these days. So let’s not quibble over who is offended and who isn’t offended by the hashtag. Instead, let’s keep the conversation where it should be and talk about the problems that WOC face in their daily lives and on online dating sites.

[Editor’s note: Apologies to the guy in the photo above. He is not a Creepy White Guy (at least not to our knowledge.) His image did come up, however, after searching for “drunk guy.”]