Facebook Isn’t Limiting Posts, At Least Not In Any Way...

by Dusten Carlson 9 years ago11 months ago

A post going viral on Facebook this week claims that admins will be limiting posts so that only about seven percent of all users will see a given thing. The message comes under the guise of a “test” and invites users to like and comment on the message so that more people see it. 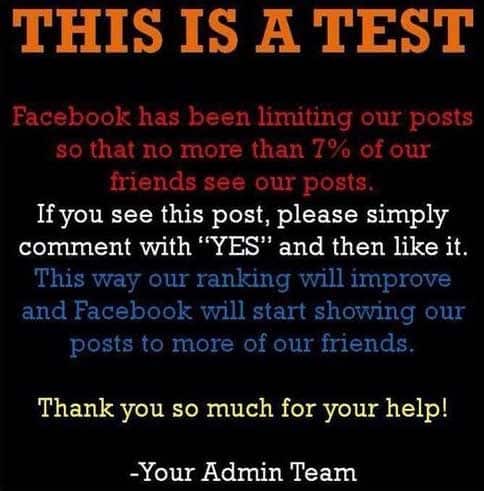 As we’ve shown numerous times, this is hardly the way that Facebook disseminates important updates and messages. However, though the above macro is an obvious fake, there is (accidentally) a bit of truth to it.

Multiple posts on Facebook’s official blog (read: where they actually disseminate important updates and messages) explain how admins use their complex algorithms to limit what you see in your news feed.

For individuals, there’s a reason that you seem to see posts from the same handful of people – Facebook’s algorithm shows you updates from people you recently interact with or regularly interact with. If it showed everything, your feed would be packed with tons of information (most of which would likely not interest most of you anyway) and it’d be very difficult to navigate.

In any case, you can actually fix Facebook’s post limit by clicking “Edit Options” and changing the settings so that you see all posts from all your friends.

For Pages, post reach has taken a nosedive in recent months. Theories abound (some suggest that its an attempt by Facebook to push paid post promotion), but frankly, sharing or commenting on the above macro isn’t going to improve your page’s impressions at all. What would? Well … paying for promoted posts.

“Facebook Isn’t Limiting Posts, At Least Not In Any Way That Matters To You” is part of SocialNewsDaily’s “Hoaxed” series which debunks viral social media hoaxes. Hit the share buttons on the left, or check out more from the series in the “Social Communities” tab up top.