Let me start by clearly stating that I am not a fan of Mediacom, and for good reason. As a customer of the broadband service provider I have had more than half a dozen well-documented technicians visit my home. Over the last 12 months my service has been nothing but a massive headache. Most of the time Mediacom has blamed my hardware, even after I purchased the best of the best routers and modems on the market.

For several months I engaged in constant arguments with Mediacom, I filed an FCC complaint, and I had documentation of line-power issues and other data entered into the company’s database. I also spent a good deal of time running SpeakEasy.com and Speedtest.net tests and rating Mediacom with the lowest rating possible on a daily basis through those services.

After a truly frustrating experience several months ago I told the @MediacomSupport team that they needed to finally fix the issue or lawyers would get involved. The problems had become so frustrating that I actually contacted a lawyer about the issue, I run my business over Mediacom broadband and the issue had become ridiculous. Even my in-laws who live five blocks away have run into massive Mediacom issues that match my own service issues.

After notifying customer service that I was prepared to file a lawsuit against the company I was immediately blocked from the @MediacomSupport Twitter account. Support told me they wouldn’t talk about my account if legal action was a POSSIBILITY. Not a reality at that point, simply a possibility.

I have been blocked which means I can’t contact Mediacom Support via DM, I can’t follow their account to catch important service notices, and I can’t retweet their messages. I can reply to their messages and I can send messages, but essentially all of my contact is now only allowed via very public channels. Luckily I don’t mind screaming into the broadband void at the top of my lungs. 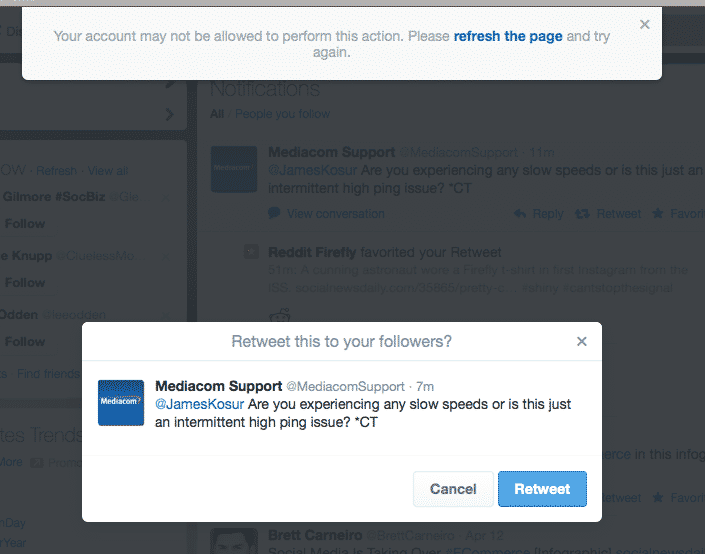 I don’t really mind being blocked by Mediacom Support, I have their phone number memorized at this point. However, from a social media point of view, locking out a direct method of contact for a single customer is beyond ridiculous. First, it forces very public communication to occur on Twitter, and if we have learned anything it is that you can’t control what people say about your brand via social channels. A strong social media plan for customer problems should include several very important steps.

Social signals can be very powerful motivators when it comes to purchasing a service. For that reason, blocking a customer from direct contact is both silly and an immature social business practice.

Had I actually taken legal action, I would understand stopping all communications, as it stood they had the head of all tech for my region come to my home and resolve the issue.

Less we forget Mediacom, you can’t control what someone says about you on Twitter or other social channels, but you can work with customers to create a better perception of your company’s reactive decisions.

Feel free to look back through my personal Twitter account, @JamesKosur, for the messages originally sent to Mediacom. I’m well aware there are a ton of crazy people who probably deserve to be blocked by companies. In my case I provide screenshots and other proof of service issues to no avail, which caused the escalation more frustration than answers, and ultimately led @MediacomSupport to wash their hands of the issue all together with the simple press of a “block” button.

Have you had similarly frustrating issues with Twitter-based customer service? Share your own stories in our comments section at the bottom of this page.